The murder of a stationmaster
Out of copyright 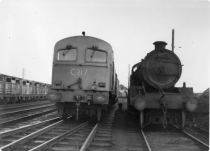 In December 1844, a meeting in Mullingar resolved to support the MGWR proposal to bring a railway line through Mullingar. In July 1845 The Midland Great Western Company of Ireland's Act of Incorporation came into law empowering the company to construct a railway from Dublin to Mullingar and Longford, and also to purchase the New Royal Canal Company.

This enabled the company to build their new line along-side the Canal from Dublin to a point four miles west of Mullingar.

The construction of the railway in the vicinity of Mullingar provided very welcome employment during the Famine era. By the end of 1846 there were 1,900 employed on the Mullingar section of the project.

The line reached Enfield by June, 1847 and by December that year reached the Hill of Down. Until such time as the railway line through Mullingar was completed, and a station built, there was a canal shuttle service between the Hill of Down and Mullingar.

The railway line reached Mullingar in September 1848 by which time the new station had been built. On Monday, October 2nd 1848 the first train arrived in Mullingar. By 1857 the station had been upgraded by the provision of new station buildings. The line to Longford was opened on 8th November 1855.

The Murder of a Stationmaster

On the night of March 2nd, 1869, Thomas Anketell, the recently appointed stationmaster in Mullingar was shot and fatally injured outside his home on the down Galway platform of Mullingar station.

The murder was thought to be linked to the Ribbonmen, a secret society then active in Westmeath, but no culprit was ever brought to justice.