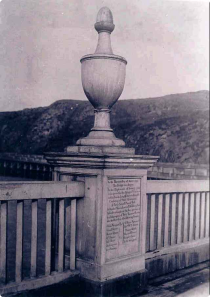 The Timber Bridge was known locally as 'Timbertoes'. Two tablets on the centre piers of the bridges recorded the construction of the bridge; "On April 13th 1793 the foundations of the bridge were laid. The money was raised through loans and parliamentary grants. The Bridge opened on the 18th January 1794 for the passage of carriages".

The Timber Bridge was 832 feet long (it was later reduced to 734 feet by quay extensions), 40 feet wide and consisted of stone supports and 40 sets of piers of oak.

The original Timber Bridge stopped ships sailing up river beyond the bridge. By 1800 a draw bridge was constructed with an opening span of 20 feet. By 1854 this was found to be inadequate and the opening was enlarged to 40 feet – which allowed paddle steamers to pass.

Timbertoes - photograph from the Lawrence Collection

Timbertoes - View across the Suir photograph from the Lawrence Collection

Timbertoes - View across the Suir photograph from the Lawrence Collection (New Series) 1800-1900.