Richard Boyle, the Earl of Cork, instituted plans for a bridge to constructed across the river bend at Cappoquin in the early 1600's. He made money in land and iron and in 1625 contracted Ralph Curtis, specialist bridge builder, to construct a wooden structure at the bend of the river in Cappoquin. Curtis also built a similar bridge at Fermoy at about the same time. Although Boyle claimed that philanthropic motives were behind his financing of the bridge, this seems somewhat disingenuous a claim given that he had much to gain financially from increased traffic and trade encouraged by a bridge across the Blackwater. Damage was sustained to the bridge in these early years by flooding, and its sister bridge in Fermoy was completely destroyed and carried away in dramatic flooding within a few years of construction. Cappoquin, however, grew as a centre of commerce. The bridge featured prominently in military strategy, both in the Irish rebellion of the 1640's and in the subsequent Cromwellian campaign due to its value as a strategic crossing place. The Down Survey maps shows a bridge at Cappoquin in the 1650's, which remained a vital part of the local infrastructure until the 19th Century. 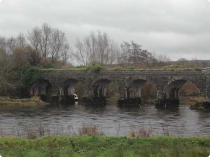 Early 19th Century plans to construct a 'new bridge' foundered through lack of commitment and finance. In 1812, for example, William Robertson's design for a new stone bridge with five arches with a footpath on either side was never erected. In the early 1840's, Sir Richard Keane referred to plans for a stone bridge which would have 50 foot arches and a drawbridge, but this too was deemed an extravagantly expensive investment and plans abandoned. In the mid 1860's the Famine Relief Act required a designated project and this proved the impetus for the construction of the current bridge, a limestone structure comprising six arches, measuring thirty-four feet wide and with a thirty foot arch on dry ground. There is a footpath on the left hand side of the bridge as you leave Cappoquin. The loan of Ł4000 was received from the Office of Public Works and on the 18th September 1847 Sir Richard Keane Bart laid the first stone before what was described as an enthusiastic crowd. Hamilton White were the contractors and although officially named the Victoria Bridge, after Queen Victoria, the bridge was never refereed to as such by the local population.

Previous - Lismore Bridge
Back to