The River Suir at Waterford is five times the width of the Liffey at O'Connell Bridge in Dublin or as wide as the Thames at Westminster Bridge in London. There was no bridge until 1794, due in the main to the depth and breadth of the river at this point. It has been conjectured, based on excavated evidence of piles and framed timber, that the Danes had a bridge here, but this was more likely to be the remnants of temporary structures, erected as a support to military considerations.

These conjectures were made by Mr. Thomas Covey, writing in 1770 in A scheme for building a bridge over the river Suire at the city of Waterford.  The plans contained in this book propose a bridge of stone and in it he appeals support for his scheme stating emphatically that it would be impossible to build a wooden bridge as timber of adequate size for such a project could not be found in Ireland or in England. Mr. Covey's scheme fell through, however, apparently through lack of local support. 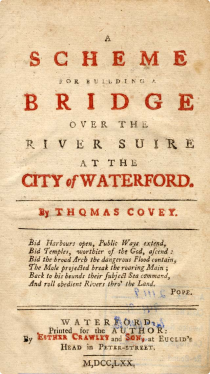 Throughout this period, prior to the construction of the first bridge, there was a ferry service that plied the crossing from time immemorial. The building of the bridge was at last undertaken in 1793, thirteen years after Mr. Covey's publication, and was constructed of American oak by Lemuel Cox. The bottom of the river was levelled and tressels evenly and securely fastened to the riverbed. The bridge was 832 feet long with a carriageway of twenty-six feet and incorporated two footpaths, both seven feet wide. For the first year there was no open span to allow taller craft through, but a drawbridge twenty-eight feet wide, was added in 1795. Sixty years later, in 1845, this open span was enlarged to forty feet. This wooden bridge was colloquially referred to as Timbertoes by the inhabitants of Waterford. Two inscribed tablets on the central piers offered accounts of the inspiration and construction details of the bridge, the second of which succinctly outlines the engineering data:

On the thirteenth day of April, 1793 /This bridge was begun /On the eighteenth of January, 1794 /It was opened for the passage of of carriages /It is 832 feet in length, 40 in breadth /Consisting of stone abutments /And forty sets of piers of oaks /The depth of water at lowest /Ebb tides 37 feet.

Built and maintained by private funding, the bridge operated under toll, which caused much conflict. The Corporation operated a public wharf on the north bank of the river to facilitate the loading and unloading of goods without merchants being subject to the tolls that would otherwise be levied on transports to and from the city across the bridge. It remained, however, a toll bridge until 1907 when the Corporation purchased it for Ł63,000 and declared it free at midnight on the last day of that year.

The need for a new bridge was long recognised before the purchase of Timbertoes, and the site of the proposed new ferro-concrete bridge was that of the demolished Timbertoes. A temporary bridge, running alongside the old one was erected and remained in place from 1911 until the opening of the new John Redmond Bridge in 1913. This was 700 feet long, measuring forty-eight feet between the parapets. It incorporated an 80 foot span, yet had a short life span. Deterioration to the structure necessitated the construction of a replacement bridge. The new bridge was planned to accommodate four lanes of traffic. Work commenced in 1982 and all phases of work completed by 1986.

A full account of all the historically significant projects, from the unrealised designs of Thomas Covey to the construction of the John Redmond Bridge, are contained in Waterford's Bridges by Edmund Downey.