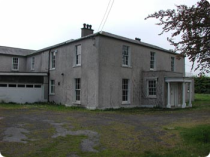 Airlie House, off Tandy's Lane in the townland of Finnnstown, was built in about 1840. Its occupant listed in 1851 is Donald Stewart and the house name is spelt 'Earlie' at that point. In fact not even the footprint of the house is visible on Griffith's 1852 map but it is visible on a slightly later valuation map in the Valuation Office. 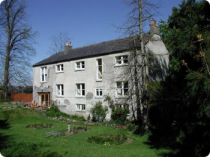 Canonbrook House is located on Moat/Esker Hill in the townland of Lucan and Pettycanon, overlooking Lucan Village, and is noted for its famous owner, the architect James Gandon (1743-1823). Gandon acquired Canonbrook in 1805; he then carried out landscaping works including planting many trees and finally moved in, in 1808, remaining there until he died in 1823.

In what once were the grounds of Canonbrook but now belong to Moat Hill House, on the top of Moat/Esker Hill, lies a ringfort. This ringfort is surrounded on three sides by steep natural slopes and on the fourth side by an artificial bank or fosse. Ringforts generally date from 7th to 10th century AD. The ringfort was incorporated into the landscaped garden of Canonbrook House by James Gandon. A souterrain or underground passage known locally as 'the cave', first came to light in the 1740's and is located in a mound in the middle of the ringfort. It is described as consisting of a narrow entrance, a circular beehive chamber, a passage leading to a second circular beehive chamber and then another passage leading to the end of the souterrain. It is no longer possible to enter the souterrain as part of the passageway has collapsed. Souterrains were constructed in Ireland between 8th to 12th centuries AD.

In 1781 James Gandon was invited to Dublin at the behest of Lord Carlow and John Beresford to supervise the construction of the new Custom House on Dublin's quayside and later the Four Courts, also on the banks of the River Liffey. Other well known buildings designed by James Gandon include the east and west porticos to the Houses of Parliament, now the Bank of Ireland at College Green, and the Law Society premises at Kings Inns, Henrietta Street. Canonbrook House was called White Lodge on Griffith's 1852 map and at the time was occupied by George Cuband. It is estimated to have been built about 1800. The house and land subsequently came into the ownership of the Shackleton family.