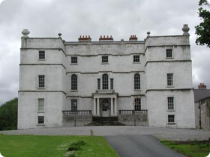 The original castle at Rathfarnham dates back to the Elizabethan period, being built on of a network of fortifications built on the outskirts of Dublin City. Adam Loftus, Archbishop of Dublin and Lord High Chancellor of Ireland, built the Castle that stands today between about 1583-1585. The castle with its four flanker towers is an excellent example of the fortified house in Ireland, however Loftus used the castle as a country retreat, entertaining and decorating lavishly. The Castle remained in the Loftus family until 1723.

In 1723 the estate was sold to settle debts and bought by 'Speaker' Connolly, owner of the Castletown estate in Celbridge, Co. Kildare. Connolly never resided at Rathfarnham but leased the castle and lands to a number of tenants who maintained it until 1767 when the Loftus family returned to claim it once again.

Nicholas Hume-Loftus, Earl of Ely inherited the estate through his mother, but died without issue in 1769. Nicholas's uncle, Henry Loftus inherited his nephew's title and fortune and set about extensive refurbishment. The main reception rooms were re-designed in the then popular neo-classical and rococo styles by renowned 18th century architects, Sir William Chambers and James 'Athenian' Stuart. The painter Angelica Kauffman was commissioned to paint family portraits and several ceiling panels.

Henry Loftus was succeed by his nephew, Charles Tottenham (later Marquis of Ely) of Loftus Hall in Wexford and Ely Lodge in Fermanagh. In the hands of the Tottenhams the castle fell into a state of disrepair and its collections were removed to their other properties. Entries in Thom's directory in 1854 and Griffith's valuation cancellation books list the owner/occupier as one Rt. Hon. Francis Blackbourne, Lord Chancellor of Ireland. Blackbourne purchased the castle in 1847 and his family carried out much needed renovations and modernisation. The Blackbournes sold the castle to the Jesuits in 1913 and it was used as a seminary until the 1980's.

In 1986 it was declared a national monument and bought by the Office of Public Works. The Castle and its grounds have been undergoing extensive renovations since then and is open to the public for guided tours. Some of the outbuildings have been converted into the offices of the Irish Conservation Volunteers. 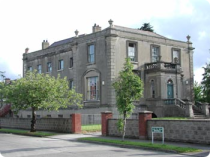 Ashfield House is located just outside of Rathfarnham Village as one approaches the River Dodder. It was built between 1790 and 1810 as a detached two-storey country house. It was refurbished in 1860 and a porch was added. There is a small gothic style summer house on its grounds. The Tottenham family of Rathfarnham Castle owned Ashfield during the 1850s, as is listed in Griffith's Valuation and Thom's Directory for that period. It is currently unoccupied. 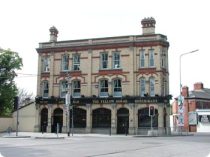 The original Yellow House was a thatched cottage on the site of the present-day Church of the Annunciation. It is said that its licence dates back to the 18th century. At the time of the 1798 and 1803 rebellions it was owned by a man named Michael Eades and frequented by Michael Dwyer and Arthur Devlin, brother of Anne Devlin, who was imprisoned for her part in hiding Robert Emmet in 1803. Eades and his family were suspected of republican sympathies and the tavern was wrecked in 1803 when it was discovered that Eades was a member of the United Irishmen.

A new Yellow House was built in 1825 by Mary Murphy and opened for business in 1827. From 1912 to 1979 the premises was in the hands of the Walker family, then sold on to the Durkin brothers who extended and refurbished it.