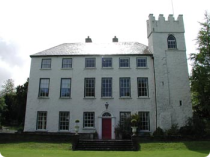 Belgard Castle is a large three storey eighteenth century house attached to a medieval tower. The tower has Georgian Gothic windows and battlements and the dining hall has Adamesque plasterwork. The house now serves as the headquarters of CRH Holdings. The house is associated with the Talbot family, known as the Talbots of Belgard, who were in occupation of the castle as far back as the 15th century and according to St John Joyce, they had to frequently defend it against forays by the nearby Irish from the mountains. Belgard is first mentioned at the close of the fifteenth century, and was then the residence of Robert Talbot, son and heir of John Talbot, of Feltrim, near Malahide.

In the time of Charles the First and during the Commonwealth, John Talbot of Belgard took sides with the Confederate Catholics, and his estates were consequently forfeited, after which he followed the adherents of the monarchy into exile and rendered distinguished service in the war in Flanders. On the Restoration the estates were restored to the family "for reason known onto the King in an especial manner meriting his grace and favour." At the war of the Revolution, Colonel John Talbot of Belgard espoused the cause of James II and fought at the battles of the Boyne and Aughrim, and the estates would no doubt have been forfeited a second time but for the fact that Colonel Talbot was included in the Articles of the Treaty of Limerick. He was the last of the Talbots of Belgard, and following his death in 1697, without a male heir, his estate passed to the Dillon family. Subsequently it came into the possession of Colonel Dillon's eldest son, Henry Dillon, who married a Miss Moore. He was a man of very considerable wealth, and great hospitality. They had a deer park and shooting lodge in the Tallaght Hills, near Ballinascorney.

Belgard subsequently passed in succession into the Trant, Cruise, Kennedy, and Lawrence families. Dr. Evory Kennedy was President of the Royal College of Physicians in Ireland. His grandson Sir Henry Lawrence was also a grandson of Sir Henry Lawrence, founder of British rule in the Punjab and defender of Lucknow. Paige Dickinson, the architect and a prominent figure in the Georgian Society, another grandson of Dr Kennedy, was born in Belgard Castle. Sir Henry Lawrence's widow sold Belgard to the Maude family in 1910.