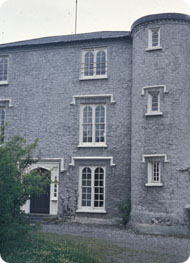 The original Knocklyon Castle dates back to the fifteenth century. It was located between the River Dodder and the mountains in an area known as the Marches, which was frequently troubled by the raids and skirmishes of the O'Toole and O'Byrne clans. Evidence suggests that it was one of the castles built especially for the defence of the Pale. The castle was held by John Burnell until 1575 and afterwards by John Bathe, who built Drumcondra Castle. Bathe was Attorney General and later Chancellor for the Exchequer until his death in 1586.

In 1584 Captain Anthony Deering acquired Knocklyon Castle, which had fallen into ruin. The castle was rebuilt in 1620 when Adam Loftus of Rathfarnham leased the property to Pierse Archibald.

This Georgian style country house was built between 1830 and 1860. It appears on the Ordnance Survey of 1843. Griffith's Valuation (1850's) lists the occupant as Daniel P. Ryan. In 1951, Knocklyon House was extended by its owner, J.H. Griffen to include a ballroom, conservatory and terrace. Captain Spencer Freeman, Director of the Irish Hospital Sweepstakes, occupied it until his death in 1982. The house is now the Rutland Centre for addiction treatment.