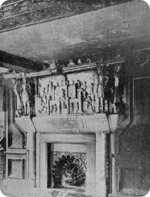 Mantlepiece from Old Bawn House which was transferred to the National Museum.

Mantlepiece from Old Bawn House which was transferred to the National Museum.

Old Bawn house was built in 1635 by Archdeacon William Bulkeley, son of Launcelot Bulkeley the Archbishop. It was almost unique in architectural style, being one of the first Irish houses that was not built purely for defence. Oldbawn had extensive pleasure gardens that survived, albeit in a neglected state, until 1900. It was situated where the St. Maelruan schools now stand.

"From a rude, desolate, and wild land he brought it to a most delightful patrimony" Handcock quoted Blacker as saying of Bulkeley's house. Old Bawn House was damaged in the rebellion of 1641 but was restored immediately at a cost of Ł3,000. The house was designed in a H shape with high pointed gables and had many windows and twelve chimneys which was unusual at that time. It had many interesting internal features such as the chimney piece and a carved oak staircase both of which are in the National Museum. The chimney piece reached to the ceiling and apparantly depicted the building of the walls of Jerusalem, it was dated 1635. There was also an unusual lodge house built to the front of the house.

The house passed to Lady Tynt who leased it and in 1830 Old Bawn was bought by the Mc Donnell family who established a paper mill behind the house. This was one of many mills along the Dodder in the nineteenth century. The house fell into disrepair during the early 1900's and was used as a storehouse when the lands were being developed in the 1960's, and eventually Old Bawn house gave way to the new developments in the area.

Marlfield House is on the Kiltipper Road in the townland of Old Bawn. Built circa 1800 as a farmhouse, it is a detached single storey house with attic. Marlfield has a classical feel to the design with roughcast rendered walls, smooth rendered to the corners, and fine cast-iron entrance gates.

Marlfield has a shallow entrance breakfront with a round-headed attic window above the door with an architrave surround, and windows flanking the door. It has a pitched slate roof with single rendered chimney stack and has a large rear extension. Handcock, in his History of Tallaght, gives us some anecdotes concerning Ben Bradley who lived at Marlfield:

Bradley rode an old white horse. This horse had a habit of coming to a dead stop when he chose, and no power would make him move. Apparantly Ben Bradley, one night in a rage, shot this horse on the road, and afterwards wanted to persuade people that he was fired at, and that his horse was maliciously killed. He tried to levy the amount off the county but was not successful. Another story is told of him that, getting into some mess about money, he assigned his property to his son Tom. He suffered a year's imprisonment, and some not very flattering remarks were passed on his conduct by Chief Justice Bushe. When he got out, he asked Tom to return him his money "Oh, no," said Tom, "it is far better where it is." Not a penny did the dutiful Tom restore to his parent.

Glenville House is on the Kiltipper Road in the townland of Oldbawn. This former farm has a striking appearance as it is situated so close to the street. It consists of a linear group of three farm buildings, built in the early 1800's. The central section has an attic; this and the two storey section to the south have roughcast rendered walls, timber sash and casement windows, and pitched slate roofs with rendered chimney stacks. The large chimney-stack on the smallest building gives a sense of balance to this group of farm buildings, which has evolved over time. Glenville appears in Duncan's map of 1821, which shows that the original path of the Kiltipper Road turned at Glenville House to a ford across the stream nearby.