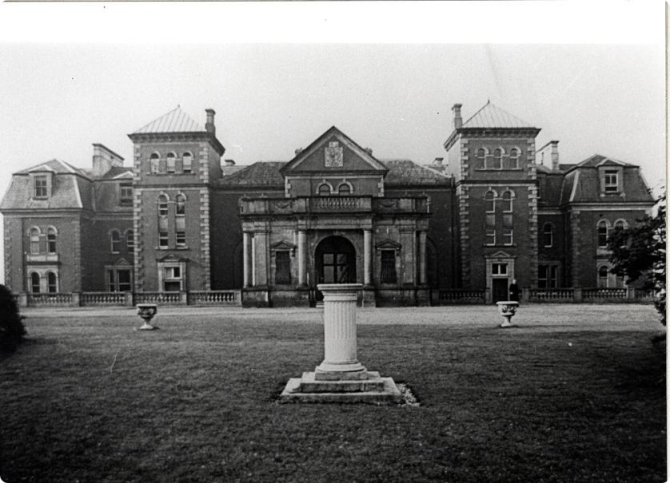 The Domvile Papers in the National Library contain an abstract of the accounts of the estate from January 1st 1794 to January 1st 1795 . It is a marvellous document and an invaluable source of information showing the degree of organization required in maintaining the estate.

However, its real value for historians is that it gives us the names of the people who were employed on the estate and is therefore a census of the labour force and their specific trade.

Colonel William Hutchinson Poe commissioned the leading architect, Sir Edwin Lutyens, to plan the gardens at Heywood. Known locally as "The Italian Gardens", they are the only example of Lutyens work outside of Dublin.

The Estate of Heywood House consisted of 24 acres, which was surrounded by walled ground that was ten feet high.

Garden Staff of Heywood House in 1905

The gardens are composed of four elements linked by a terrace that runs along the front of the house. Hence, a large garden staff was required to maintain the gardens of Heywood House.

The Italian Gardens at Heywood House were commissioned by Colonel William Hutchinson Poe. They were designed by the architect Sir Edwin Lutyens.

William Trench arrived in Heywood towards the end of the 17th century.

The gardens were completed in 1912 at a cost of £250,000. They consist of formal gardens, lakes, woodland and architectural features, such as gothic gates and artificial ruins, embellished with vandalized medieval pieces such as the window taken from Aghaboe Abbey.

After World War 1, Sir Edwin Lutyens was involved in the design of the British war cemeteries. He designed the War Memorial Gardens in Islandbridge, the Cenotaph in London and the Viceroy's house in Delhi.

Fortunately the gardens in Heywood escaped damage and they remained as structurally intact as they were when they were completed at the turn of the century. The gardens have a spectacular setting on a hillside looking south east over a sweep of undulating country which takes in seven counties.

The gardens are open to the public and are operated by the Office of Public Works.