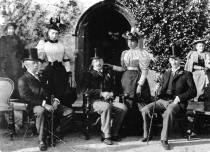 In contrast to the servants, landlords and their families lived relatively opulent and leisured lifestyles; because of the wealth generated by rental incomes, landlords comprised the wealthiest class in Ireland. Their big houses symbolised this wealth, as did the contents of their houses, particularly valuable works of art.

Landlords lived leisured lifestyles. They entertained family and friends in their houses to dinner parties, balls and theatrical evenings. They provided shooting parties. Fox hunting was their favourite sport. They also invested a great deal of time and money in horse racing. During race meetings such as Punchestown, many landlords who lived in proximity to the racecourse provided accommodation to landed families from further afield.

The children of the wealthiest landlords went visiting all of the major cities in Europe as part of their educational process: this was known as 'the Grand Tour'.

Their education started in the home under the tutelage of governesses. Until the late nineteenth century, girls usually remained at home, while their brothers went off to public schools such as Eton and Harrow in England (at least those of the wealthier families, while those who could not afford to those so went to schools in Ireland such as St. Columba's in Co. Dublin) 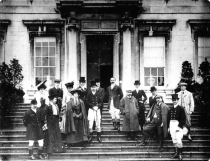 The wealthier landlords moved to Dublin and London at different times of the year, particularly for the so-called ball seasons, taking with them their families and most of their servants.

The Dublin season lasted from Christmas to St. Patrick's Day. The London season lasted from May until August. Wealthy families stayed in their own city houses in Dublin and London, rented houses, or stayed in hotels (such as Buswell's and the Shelbourne in Dublin.) The seasons offered families the opportunity to introduce their daughters to society in the hope that they would secure suitable future husbands.

Members of landed families tended to marry into other Irish or British landed families. Daughters often married army officers or clergymen who were the younger sons of landlords. As a rule, only the eldest sons inherited the house and landed estate.