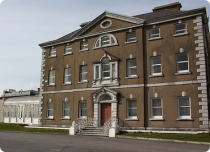 The Estate of Bessborough House stretches from Lakeland's to Skehard Road in Blackrock, a suburb of Cork City. Little is known of the early history of the house and estate. A date on the exterior of the house suggests that the original house was built in 1760.

It appears that the house was built for the Allen family; a Mr J. Spence acquired the property in 1814, then the Bousefield family owned it before it was acquired by the Pike family. Joseph Pike acquired the property in 1820 when it was just an ordinary house with extensive lands attached to it. It is likely that he or his son Ebenezer modernized the interior of the house and successive generations continued to develop the estate.

Family names such as Pim, Sargent, Madden, Coulson, Fergson, Sleeman, Addis, Nagle, Cragg, and Cox may be associated with the estate in one capacity or another. The Pikes were a Quaker family: they were very well known in commercial circles and owned a number of successful businesses. The Pikes resided on the estate until the early twentieth century. The Sacred Heart Order of Nuns purchased the property in 1922 and they continue to run it to this day.

Bessborough House is a fine Georgian three-storey mansion, which enjoyed its best period in the mid-nineteenth century. The house possesses many architectural features, both in its interior and exterior. The house has three stories with seven cut stone facing windows on each storey. The main doorway has a pediment situated above it; possibly substituted for the original doorcase in the Victorian period. There are many distinctive architectural features to the house including ornate ceilings, the staircase and the fireplaces.

Two plans of the house and grounds exist for 1841 and for 1901 and they highlight the changes that took place in the intervening years, many of which were due to altered estate management practices. Change was constantly happening in Bessborough and its estate. Each owner, members of the Pike family, left a personal mark on the big house and its lands. These would have included the creation of the farmyard as the estate endeavoured to become more self-sufficient. The "New" wind pump used to pump water up to the house also showed this emphasis on economy and self-sufficiency.

In keeping with the fashions of the time a Keep was situated to the south east of the house. It was built mainly as a Folly. It is about 25ft. tall, 20ft. wide and 15ft. in length. There is a large stone block at each corner and a small window at each side. A small arched doorway serves as an entrance, which is flanked by two small windows of the same design. Also above the door are two small half-size windows. Inside it there are two small rooms, which are divided by a wall. The roof has since collapsed.

Behind the Keep there was a children's burial ground. It is unclear as to whether it was used by the Pikes or used by any of the other families who once resided at Bessborough. Since the Sacred Heart Nuns came to Bessborough in 1922, they have used it as their Sisters' graveyard.

Situated on the right side behind the Boathouse there are five islands which are called the "Miniature Lakes of Killarney". These were created by one of the Pikes, probably during the mid-19th Century. Five mini islands were artificially created and surrounded by a deep moat. Small paddleboats were said to have been stored in the nearby Boathouse and were used by the Pike Family to go boating around the island. A number of stone bridges were built to connect the islands, some of which have since collapsed.

The grounds now include a crčche, workshops, garden and a Heritage Centre. The garden leads down to the shore by the Douglas Estuary and to the line where the old Cork, Blackrock and Passage Railway ran.

Next - The Pike Family