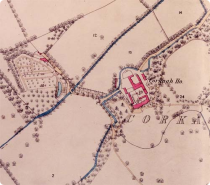 Very little is known about the Corkagh area prior to the arrival of the Anglo-Normans to Ireland. One of the earliest references to Corkagh dates back to 1324 when it is mentioned as being part of the lands in Clondalkin belonging to the then Archbishop of Dublin, Alexander de Bicknor. The lands that make up Corkagh were at times part of a vast amount of property owned by the church and often parcels of these lands were leased to various tenants.

The former Corkagh House originally started out as a small farmhouse built area 1650. According to Liam Ua Broin, a map dating from 1658 indicates two houses with a moat. Neither seemed to be of any great size or possess any castle type features. Corkagh House was extended between 1702 and 1714 when a large wing was added to the existing buildings. The addition had eight bays and a parapeted roof.

At a later stage a porch was added to the front entrance of the later wing. In its heyday, Corkagh House contained ten bedrooms, a library, a dining room, drawing room, study and anteroom. It provided employment for twenty-five house servants. Outside, the management of the demesne lands provided employment for a further twenty-five men.There was a substantial walled garden, most of which remains, though in an overgrown state. An arched yew walk, a beech hedge rectangle grown to the size of trees and the remnants of a pond are still to be seen. There was a stove house and a number of glass houses, including one for peaches and one for vine s. Numerous fruit trees were also grown.

The former farm outbuildings and barns are still to be seen to the rear of where the house once stood. These are impressive cut stone structures with hipped roofs. There was a rose garden and a dairy. There was also a most unusual laundry. It had detailed wrought iron supports for the shelves and elaborate plaster cornicing, which is still visible in what is now the Park Depot office.

A tennis court stood at the front of the house and further out across the front Lawn was a ha-ha - a ditch which prevented livestock from trespassing, while providing an uninterrupted view. There was also an ice-house, the remains of which are still to be seen over near the present-day Camac Valley Tourist Caravan and Camping Park. It was constructed of red brick and built into the ground.

Diversions of the River Camac are channelled around the back and the front of the farm buildings, former house site and lawn, giving the impression of a moat encircling this area. Several picturesque stone bridges cross the rear channel.

Near to where the children's playground is Located was an unusual building known as the Hexagon or the 'Heck'. This was built for Colonel Henry Thomas Finlay by his father, Reverend John William Finlay in the nineteenth century and was used as a playhouse and tea-room. As the name implies it was hexagonal in shape, eight feet across, with two windows, a fireplace, a cupboard and a door. The walls were made of brick and stone and it had a thatched roof.

Approximately south-west of the house is an area which was known as the Cedar Lawn. It is bordered by several impressive Cedar trees and was a popular location for taking tea outdoors, croquet and tennis. Off the cedar lawn was a water garden.

There were three primary entrances into the Estate. The main entrance ran from the Naas Road straight in front of the house taking a circuitous route to the side of the house. It was known as the Oak Avenue and still survives in today's park. There was a Lodge at the gates. A second en trance ran from what is now St. John's Road and followed the same route as the current path from the car park entrance to the house site. There was also a gate lodge at this entrance. The third entrance, with a lodge, Led from the Naas Road down to Kilmat ead House.According to several eighteenth century maps a road bisected the estate, running parallel to the Naas Road. It was labelled on one map as The Green Road from Newcastle to Dublin (Duff, 1703) and in Corkagh Estate itself passed the front of Kilmatead House towards St. John's Road.

Next - Big Houses in South Dublin