Background to the FitzGerald Family at Glin 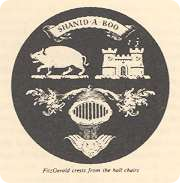 The Knights of Glin are a branch of the great Norman family, the Fitzgeralds or Geraldines, Earls of Desmond who were granted extensive lands in County Limerick in the early 14th. century by their Desmond overlords.

The Desmond family were all descended from the Norman Maurice Fitzgerald, a companion-in-arms to Strongbow. Maurice was the son of Gerald of Windsor and his wife the Welsh Princess Nesta.

The Fitzgeralds came to Ireland from Wales in the 1170's as mercenaries, at the request of King Dermot MacMurrough to help him subdue his subjects.

The last White Knight, Maurice Og FitzGibbon died in 1611 and the title is now believed to be extinct. Maurice's son , Thomas FitzMaurice FitzGerald was granted Shanid in West Limerick in 1197 where he built a polygonal keep, on a motte, in about 1200. 'Shanid Abu' means 'Shanid for ever' and was always the Desmond Geraldines war-cry. It can be seen on the coat-of-arms on the ceiling of Glin Castle and on many pieces of silver in the house.

The Knights of Glin were granted the barony of Kenry bordering the banks of the Shannon, near the great Desmond castle of Askeaton. In the Middle Ages the holder of the title was known as 'the Knight of the Glen' or 'the Knight of the Valley'. The Knights held extensive lands along the valley of the river Shannon between Limerick and the sea. They then owned a large number of tower houses in this area including Shanpallas and Cappagh near Rathkeale. The lands around Glin on the Kerry border made up another defensive area marching with those of the Gaelic chieftain the O'Connor of Kerry.

The Glin FitzGeralds survived the Elizabethan, Cromwellian and Jacobite Wars. They then fought against the English with their kinsmen the Earls of Desmond. Thomas FitzGerald was hanged, drawn and quartered by the English forces in Limerick in 1567. He was heir of the then Knight and legend has it that his mother seized his severed head, drank his blood before carrying his dismembered body to Lislaughtin Abbey.

One of the Knights of Glin's castles in Co. Limerick, the old Glin castle (now a ruin in Glin village), was dramatically besieged by Elizabeth's forces in July 1600, during the uprising of the 'Sugan' or 'Straw' Earl of Desmond. Before the siege Sir George Carew captured the Knight's six-year-old son, tied him to the mouth of a cannon and threatened to blow him to pieces unless the Knight did not surrender. The Knight replied bluntly that he was virile and his wife was strong and it would be easy to produce another son.'

The Knight managed to hold on to the last portion of his estates which consisted of some 15, 000 acres and included the castle at Glin.