Interview with the present Knight of Glin 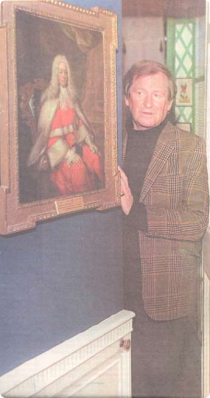 Interview with the present Knight of Glin, Desmond FitzGerald - extract from an article by Victoria Mary Clarke in The Sunday Independent November 17, 2002

'Does being the Knight isolate you as a human being?' I ask over dinner. I've asked Honor if being his daughter makes people treat her differently.

'Of course you feel different,' she said. 'But I've never had a problem with anyone because of it. Even though I have an English accent, I feel far more Irish than English and I have absolutely no belief in any kind of hierarchy or class system. I'm totally approachable and I get on with people.'

The Knight pauses and beckons politely to a waitress.

' Do you have any mustard my dear? Oh yes, of course it sets you apart. And I'm not a particularly hail-fellow-well- met kind of person.'

'I'm perfectly approachable if people approach me but I'm shy. I don't really thrive under hearty conditions . I don't go to pubs.'

'I thought you were a bit stuck-up', I confess. 'Do most people think that? I'm sure they do. Does it bother you?'

'No. In my life I've always known exactly which people I've wanted to be involved with and they are mostly academics. So I really couldn't care less if people want to think I'm stuck-up. I get a constant stream of people asking for my help and I'm very happy to be of help, if I can. I believe firmly in education and I do a lot of lecturing. That, I believe is one of the most inspiring elements of life, communication with people who are interested.

As for the glooms he freely admits to suffering from depression. It has now been treated by lithium, which he regards as a miracle. He would like to go on record about this because of the stigma that is attached to depression in this country and because he would like people to know that it can be successfully treated.

Whether or not he is approachable, the Knight has always been surrounded by beautiful women. His current wife, Madam Olda, was one of the most desirable women in London when they met. His previous wife, Lulu, was a famous model as were several girlfriends. His daughters are all beautiful. Is he not in the least intimidated by all these lovely ladies?

'Not at all. I made my mind up at an early age never to be intimidated by beautiful women!'

Everyone that I have spoken to has commented on how much in love the Knight and his wife are. Sex, he tells me, is absolutely necessary for the human spirit. 'I feel terribly sorry for people who don't ,' he says. 'You can tell, can't you? They look half dead.' I agree.

Another friend suggested that I ask him to show me his photo albums. ' They're outrageous,' she said. 'Full of tures of himself!' I ask him about this and he laughs. Sadly, when I search through five of the many albums I can't find any.

Clearly this man is not a Catholic. 'No'. He is adamant about this one. 'I don't believe in religion. When I die, I'll be content with having achieved something in this life, I don't need to make plans for another one!

But he doesn't like to talk about religion. He's aware of the divisions that it creates, and he's not interested in creating divisions. His mother Veronica, was very much in favour of divisions, particularly the class divide. She was descended from a long line of aristocrats and was related to the late Princess Diana. Descended himself from a long line of Norman-Irish rebels, Desmond FitzGerald, the present Knight's father was miserable in his marriage to Veronica.

Veronica was known as 'the Knight's mare' and was notoriously arrogant and unpopular. She came to live at Glin after her marriage and lived with her husband and his aged father, with whom she never got on. Very soon, she was back in London openly having affairs and her husband was distraught. The Knight has very few memories of his father.

It surprises me, I say, that the Knight allowed his father's intimate diaries to be made public – they were donated to Limerick University. He believes that if a story is to be told, it should not skirt around difficult bits, even if those difficult bits are the tragic marriage of his parents. I search for a trace of bitterness in his voice when he describes his mother, but there isn't one.

'Your mother was a firm believer in the superiority of the aristocracy,' I suggest.

'Oh yes, she was very right-wing. I've always been intensely interested in family history and genealogy, but I don't think anyone is superior to anyone else. I don't share her sentiments and I don't believe in snobbery. I think people are what they are.'

As a child, the Knight was obsessed with the house which had been built by Colonel John and Margaretta.

'As a child I was fascinated by the stories I was told by the estate carpenter. My mother saved the house, she was always interested in it, too. Eventually, I shall have to do a book about it all. 'Did you see the headless statue in the walled garden? I found that when I was 12 in a field and I bought if for a pound. I was very lucky because my step-father encouraged me and supported me financially. I've never been a great money-maker!'

Apart from writing books about Irish paintings and furniture, he is Christies Irish representative. And he is president of the Georgian Society. I suggest that there might be a conflict of interest between the two.

'Oh yes, I've been a conflict of interests all my life. But I know where my motivation lies which is to get as much stuff as possible brought back here.'

The preservation of the house and its contents is his passion. Not as a museum, nor as a hotel, but as an example of what a big house of its period was like. Built for hospitality. He would hate to sit here alone, he says. He loves to see people here because that is what his ancestors intended it for.

It is the ultimate in luxury guest-houses. It feels as though you are in a family home- a most exquisite home, with warmth and combined. The very finest furniture and paintings, but centrally heated and clean.

There are perhaps five other guests during my stay, but I see them only at meal times. There are endless places to sit without bumping into anyone. And there are twice as many staff as residents. It would be the perfect place to get away from the world. This makes the Knight happy and he hopes that it will continue, but he doesn't hold his breath. 'Anything can happen,' he reminds me. 'But on the other hand, the FitzGeralds are nothing if not tenacious', I say.

'That's true,' he says. 'There haven't been any very important people in my family, but they've stuck here for an extraordinary length of time! That's the most remarkable thing about them.'

The three daughters are all following in the family's tradition, each in their own way. All three have degrees in History of Art. Catherine, the eldest, is an interior designer. Nesta, is a passionate gardener, like her mother and her grandmother before her. Honor handles the publicity for the castle as well as modelling and deejaying in Dublin. Their parents were ous party people, hanging out with the Rolling Stones in swinging London. Their daughters have done their fair share of that too.

'Honor is the Irish Posh Spice,' I tell her. 'Oh God,' she says. 'I'm not ous! I'm an old bag.' Modest and self-deprecating just like her dad. Clearly, the FitzGeralds will still be spirited, even if there are no more Knights.

'It must be sad to be the last Knight of Glin,' I say. He doesn't hesitate. 'No, because it's time there was an end to it. It's just a romantic charade.'

After dinner, we adjourn to a sitting-room which boasts a Bossi fireplace and very comfy chairs. The Knight is required to pose for photograpsh which he absolutely hates. He looks awfully stiff. This too runs in the family. Honor hates having her photo taken, however svelte and super-modelly she looks.

'Think of the punters,' I say.