James the first Duke of Ormond

Image of a portrait of James the first Duke of Ormond.

James the first Duke of Ormond

Image of a portrait of James the first Duke of Ormond.

James, the 12th Earl of Ormond, (1610-1688), was a grandson of Walter Butler of Kilcash, a devout Catholic known as "Walter Na bPaidirin". James was a child when his father died, and he was brought up by the Court of Wards, and educated as a Protestant by the Archbishop of Canterbury. He was trained to despise the faith of his grandfather, and he became a bigot of the worst kind, and a treacherous enemy of the Confederation of Kilkenny.

A staunch supporter of Charles I, he raised an army in 1641 in support of the Confederacy, against the Parliamentary forces, but we have no record that he pressed his Rush tenantry into service on that occasion. In fact from the complaints of his tenants regarding the state of 'his towne of Rushe', it would appear he spent little time in it. He went into exile in1641, and remained in exile in France until 1648, when he returned briefly in a vain attempt to besiege the Parliamentary forces at Rathmines and Baggotrath.

He was defeated and returned to France. His royal master was not so lucky, and was beheaded in 1649. In 1660, James the 12th Earl of Ormond returned to Ireland with Charles II. Charles II created him Duke of Ormond in 1661, and appointed him Lord Lieutenant of Ireland, and also confirmed him once again in his Irish lands. He was created both an English and an Irish Duke, and was made a Privy Councillor in England, Ireland and Scotland.

He sat in the House of Lords along with three of his sons, was a Knight of the Garter, and Chancellor of the University of Dublin, and of the University of Oxford. He lived in the vice-regal residence, which is now known as the Magazine Fort, Phoenix Park. On the accession of James II, in 1669, Ormond was deprived of the royal friendship, as a result of a jealous intrigue, but was reinstated as Viceroy in 1676. He retired to England at the age of 78, and died there in 1688. He is buried in Westminster Abbey.

In 1654, the tenant of big house at Kenure was one Robert Walsh. The estate, at that time was estimated at 300 acres, and valued at Ł120. The Civil Survey of 1654 states that it comprised 'one Mansion House of stone & one slated house of Office, a Barne & Stable slated, one thatcht Barne two other houses of office thatcht, six tenements, five cabbins part of an old castle Valued by ye Jury at five hundred poundes, a garden plott, one young orchard with some young trees set for ornament, a ruined Chappell of Ease, one horse mill now out of use & one decayed Pigeon House'.

The occupier was 'an Irish papist, Robert Walsh'. The Walsh Family had not been as lucky as their landlord. They had lost everything after the 1641 rising. The last representatives of this family were three brothers who became priests. Joseph was parish priest of Rush, from 1689 to 1730, Christopher was parish priest of Swords, and James, a Jesuit, who died in Spain. They were described as being 'of a respectable and opulent family, despoiled of all, on account of their religion' Fr. Joseph, ordained in Salamanca in 1680, died in 1730, and in his will, he asked to be buried with his brother in Kenure.

The tombstone, now broken, can be seen within the ruins of St. Catherine's Church, near the Skerries Road. The inscription, which probably refers to his father or grandfather, reads as follows, 'Here under liet the Bodye of Robert Walshe who caused this monument to be made for himself, his beloved wife Margaret Dillon, who dyed the 4th of June Anno Domini 1631, and their posteritye for whose souls ye are desired to pray. 10th May, 1632.'

The Baron Of Strabane 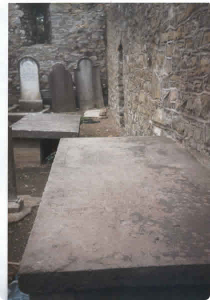 The tomb of the Baron of Strabane

A photograph of the tomb of the Baron of Strabane.

The tomb of the Baron of Strabane

A photograph of the tomb of the Baron of Strabane.

During the period of the Earl of Ormond's exile and dispossession, another family, the Hamiltons, occupied Kenure.

Within the walls of St. Catherine's Church is the tomb of 'the affable, obliging, exemplary, wise, devout, most charitable, most virtuous and religious, the RT. Hon George Lord Hamilton, Baron of Strabane', who resided at Kenure and died there in 1668.

It was erected by his widow Elizabeth, daughter of Christopher Fagan of Feltrim.

The Fagans were a distinguished landed family whose ancestral home stood on Feltrim Hill.