Blackrock in the eighteenth century developed as a bathing resort popular with aristocrats and wealthy coming out of Dublin. Many current names give a feel of the continental health resorts by which Blackrock was inspired at the time: Qi si Sano, Montebello, Idrone Sur Mer, Montepelier, Frascati, and Maretimo. The last two were some of the residences with the important connections in the area.

Frascati House, formerly located in Blackrock, was a fine example of the marine villa style residences built for the gentry and wealthy of Dublin, in this early eighteenth century fashionable resort.

Built for the provost of Trinity College it was later acquired in the 1750s by the Fitzgerald dukes of Leinster. These were extremely wealthy landlords who held large estates in Ireland, with their principal residence at Carton just outside Maynooth in Co. Kildare, and had built Leinster House as their Dublin townhouse in the years after 1745.

Emily Fitzgerald, neé Lennox, Duchess of Leinster (1731-1814) who bought the villa was very fond of it and enlarged the structure by adding wings. The interior of the house had fine examples of ceiling plasterwork and painting and other typical Georgian features such as a circular room.

Frascati was chiefly famous for its connection to Lord Edward Fitzgerald (1763-1798), the son of Emily, who lived there after 1793, on his return from France with his young wife. Lord Edward was a famous participant in the United Irishmen 1798 rising, and an early advocate of the idea of an Irish nation built on non-sectararian lines.

Frascati was controversially demolished in 1983 after a high-profile campaign to save it, and years of dereliction. 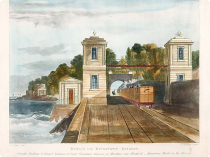 courtesy of the National Library of Ireland
Enlarge image

Another fine example of a sea-side residence of the gentry was Maretimo. This red-bricked house was built around 1770 for Nicholas Lawless, Lord Cloncurry, in a mini-demense with extensive gardens. His main residence was at Lyons in County Kildare, the centre of a 125,000 acre estate in parts of Meath, Kildare and Dublin. His son Valentine, a great art patron, who succeeded him to the title was also involved with the United Irishmen, and used Maretimo as his principal city residence.

This house in Blackrock, which had some fine rococco features, was demolished in late 1970. The only evidence to survive of any substance on the site is the private railway bridge with two towers which still straddles the railway line, and a private jetty (Vances' Harbour) built in the early 1830s when Lord Cloncurry sold his sea-frontage as the Dublin-Kingstown Railway was being built. An unsual feature of the towers is the balliers which were in fact disguised chimneys.