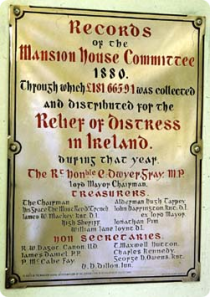 In times of economic distress communities in Ireland were heavily reliant on charitable organisations to supplement their basic wages or provide relief during crop failures. Charitable organisations had wound down relief works in the years following the Great Famine as Ireland gradually recovered. However successive failures of harvests from 1877 - 1879 led to widespread devastation and hunger, historically known as the 'Little Famine' of 1880.

, Lord Mayor of Dublin, set up the Dublin Mansion House Relief Fund on 2 January 1880 for the relief of distress in Ireland. The work of the fund was administered by a voluntary central committee and moneys were raised in Europe, North America, India and Australia. It was an all-Ireland relief fund with over 800 local committees set up in the thirty-two counties, of which membership of clergy of all denominations and poor-law medical officers was a pre-requisite. The central committee provided funds to voluntary committees who distributed in kind, supplying Indian Meal, turf and clothes to the most needy.

The central committee fund raised, provided information circulars and published appeals in newspapers, appealing on more than one occasion to the people of England.

'This distress daily increases in area and in its intensity so much so that it seems impossible to avert until the next harvest an absolute famine in very many places. Every effort is being made in Ireland itself, as well by Local as by Central Relief Committees, to mitigate the calamity, but owing to the general commercial and agricultural depression, and to the wide-spread character of the distress, these efforts have proved totally inadequate to meet the crisis'.
(Dublin Mansion House Fund Ch1/64) 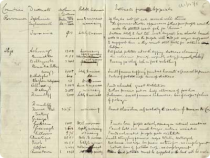 Table showing extent of distress by district for Roscommon and Sligo

Table showing extent of distress by district for Roscommon and Sligo

By May 1880 the fund had distributed over Ł130,000 to Local Committees, with one month alone requiring Ł32,000 to provide basic foods to the starving.

Although many were affected, the 'Little Famine' lasted a comparatively short time, autumn 1880 yielded a good harvest and the Mansion House Fund was no longer required for the relief of distress. It was wound up in December of that year.

The papers of the Mansion House Fund can be accessed in Dublin City Library and Archive.

Many of the Lord Mayors of Dublin set up charitable committees and funds to aid works in Ireland and abroad. Some of these included: the Candian Fund for Relief of Distress in Ireland 1880; South City Markets Fire Brigade Fund, 1892; Achill Improvement Fund 1894; and the Barry Sullivan Memorial Fund.