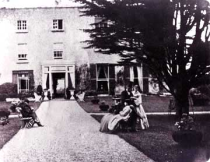 Bushy Park House was originally owned by Arthur Bushe of Dangan, County Kilkenny, Secretary to the Revenue Commissioners, who built the house in 1700. The house, at this time, was known as 'Bushes House', on a site of 4 hectares. A John Hobson became the owner in 1772 and changed the name of the house to Bushy Park, possibly after the park in London of that name.

Bushy Park House was then purchased by Abraham Wilkinson in 1791 who added almost 40 hectares to the estate. The house and estate were given as a dowry to his only child Maria, when she married Sir Robert Shaw (1774-1849), 1st Baronet, Member of Parliament and Lord Mayor of Dublin (1815-1816) in 1796. 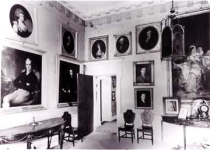 Bushy Park House is a three-storey over-basement Georgian house with a plain façade. In the early part of the nineteenth century the front of the house and the northern wing were rebuilt, with large ground floor windows and external shutters added. On the south side of the house were large enclosed gardens, and on the north side almost one hundred acres of parkland, extending as far as Terenure village. A long avenue led to the Rathfarnham Road while the original short avenue led to what is now Fortfield Road.

The park is noted for its woodland walks, ornamental ponds, and beautiful Dodder Walk as well as catering for football, tennis, boules and children's play.

Map from Deed of Conveyance