The Shaw collection of papers, held by Dublin City Archives, contains a number of interesting deeds and maps, illustrating the administration of the estate lands. The estate deeds from the Shaw collection provide a useful insight into landlord and tenant life, showing the extent of the Bushy Park estate and some of the families who resided there. The deeds give details of lands to be leased and give context to their position by describing the boundary lands and occupants. Like most leases, they specify the terms and conditions of the tenancy, which include some unusual requests such as in a lease between Robert Shaw and Michael Murphy (AR/add/52/2) where Robert Shaw reserved the right to hunt, hawk, fish, and fowl on said premises at fit and proper seasons of the year. In addition many of the deeds contain maps drawn to scale showing the outline and size of the lands to be leased, giving good insight into the history of Terenure and the surrounding areas.

Additionally, the collection highlights the role and responsibility of the family head in acting as executor and trustee to the extended family. In addition to his role as landlord, Sir Robert Shaw also supported his extended family by acting as a trustee, an executor and overseer of legal transactions. One deed in particular from this section stands out, a copy deed of release (AR/add/52/22), where Sir Robert was released from his duties as executor to the will of Lidia Wilkinson. In her will Lidia left legacies to Eliza Doolittle and Isabella Doolittle of Cork and Henry Doolittle of Dublin City. These papers may have been of interest to Sir Robert's collateral desendant, the dramatist George Bernard Shaw, by supplying character names for some of his most famous plays. 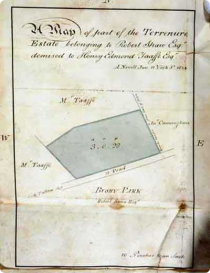 It relates to part of the lands of Terenure, late in the possession of John Cunningham, by survey containing 3 acres and 28 perches plantation measure, bounded on the west and north to part of Terenure in the possession of Henry Edmond Taaffe and on the east to the holding of John Cunningham and on the south by the road leading from Dublin to Tallow. The coloured map of Terenure is by A. Neville Junior, 11 York Street, 1814. Scale 10 perches to 1 inch.

View an enlarged image of Map of Robert Shaw's estate 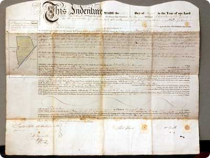 Lease of Lands between Robert Shaw and William Smith

Lease of Lands between Robert Shaw and William Smith 1819

Lease of Lands between Robert Shaw and William Smith

Lease of Lands between Robert Shaw and William Smith 1819 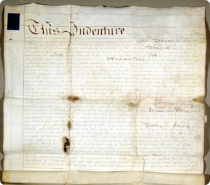 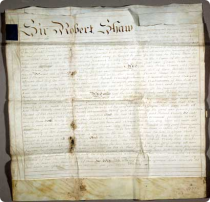 Record of speech made by Sir Robert Shaw M. P

Record of speech made by Sir Robert Shaw M. P

Record of speech made by Sir Robert Shaw M. P., Dublin Assembly Roll, 1822 in relation to the Repeal of the Hearth and Window Tax in Ireland, Calender of Ancient Records of Dublin, Vol. XVII, 1814 - 1822, Dublin City Assembly being forerunner to the present day Dublin City Council 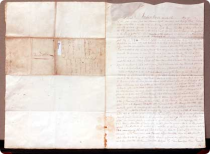 Deed of Release of Legacies

Deed of Release of Legacies

Deed of Release of Legacies
Lidia Wilkinson and Doolittle Family 1823

Eliza Doolittle text detail from Deed of Release of Legacies

Eliza Doolittle text detail from Deed of Release of Legacies