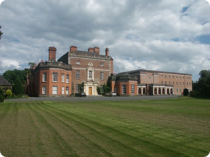 In Use As: School

Detached multiple-bay three-storey Palladian country house, built 1730 possibly to designs by Francis Bindon, with asymmetrical two and single-storey projecting side wings of the 1890s, now in use as a school with a large Neo-Georgian school and assembly hall/ chapel extension of 1950 to the south. The original section of the building is three-storey and roughly square in plan. To the north is the two-storey projecting wing of c.1890, whose west front consists of a canted bay, with similarly styled contemporary largely single-storey wing to south. To the south again is the large three to four-storey L-shaped school and single-storey double-height assembly hall extension of 1950.

The school extensions are linked to the former house by means of a single-storey flat-roofed corridor section. The façade is in brick with different tones of brick clearly defining the extent of the original house and the extent of each of the later additions. The original section also has granite quoins, decorative granite balustrade-like parapet and granite string course, whilst the 1890s wings have a similar parapet and a rendered base course, with similar rendered base course, stringcourse, eaves course and window surrounds to the school section. The linking corridor has a series of pilasters between its windows as well and as a frieze.

The original house has a slated hipped roof with a slated part hipped, part gabled-ended roofs to the wings, a slated hipped roof to the assembly hall/ chapel, and a flat roof to the large school section. Tall brick chimneystacks to the original house and wings, and flat-roofed dormers to wing to north. The main entrance consists of the original panelled timber door set within a large painted stone surround with pairs of three-quarter Doric columns supporting an entablature with decorative mouldings of cattle skulls with garlands, and projecting cornice above.

The windows to all the sections are mainly flat-headed with timber sash frames, mostly six over six or nine over six, with some tripartite sash windows and roundels to the school section, and tall semi-circular leaded pane windows to the assembly hall and semi-circular headed windows/ doors to the link corridor. The window above main entrance has a painted stone surround with three-quarter Ionic columns and pediment. Above this, to the second floor, is a small eye brow window with a plain painted stone surround. There is a tarmac-covered carpark to the front of building with large lawn beyond and extensive grounds to all sides. Detached part c.1730, part 1890s outbuildings to the north. Internally much original detailing has survived including panelled walls, architraves, main staircase and fireplaces.

Whilst historically and socially this building is of considerable local importance, in architectural terms the original Palladian style house has been somewhat compromised by the later additions in the form of ill-conceived asymmetrical additions of the 1890s, and the imposing school extension of 1950. The last addition is however a fine example of mid 20th-century Neo-Georgianism in its own right and whilst one might conceivably doubt the value of the whole ensemble, one cannot fail to be impressed by at least the eldest and most recent of its component parts 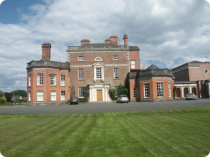 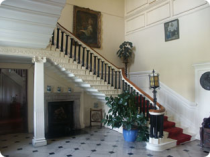