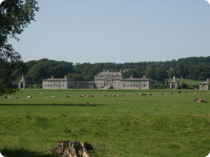 Detached seven-bay two-storey over basement Palladian style mansion, built 1741 - 48 to designs by Richard Castle, with quadrant Doric colonnades linking to seven-bay two-storey pavilion wings, themselves linked to outbuildings by walls with rusticated arches topped with cupolas. The walls are of dressed granite, with a central feature to the main block consisting of a pediment supported by four three-quarter Corinthian columns with swag mouldings between the capitals, whilst the wings have three-bay breakfront centres with Ionic pilasters. Each of the three blocks and the colonnades has a parapet surmounted with urns, and behind each parapet is a slated hipped roof with broad granite chimneystacks to the main blocks. Within the colonnades are arched niches with Classical statues.

The entrance consists of a largely glazed timber door with semi-circular fanlight-like eyebrow window above, and is reached by a grand flight of stone steps with the piers of the balustrade topped with urns and heraldic lions. The windows are generally flat-headed and filled with three over three and six over six timber sash frames.

The house is surrounded by an extensive, but largely unadorned, demesne and approached at a right angle from the main avenue to the north-east.

Possibly the greatest Palladian mansion in Ireland and one of the best preserved 18th-century buildings in the whole country, Russborough's worth is beyond doubt.