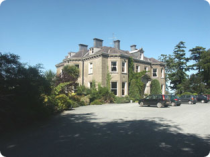 In Use As: Hotel

Tinakilly is a detached four-bay, two-storey with attic country house, built between 1876 and 1883 to designs by James Franklin Fuller, now in use as a hotel with large single and three-storey extensions to the east and north of 1991 and 1997. The faēade is finished in unpainted lined render with moulded quoins, window surrounds and a dentilled eaves course. The decorative pedimented entrance surround is in rusticated granite. The overhanging hipped roof is slated and has large rendered chimneystacks with pronounced base courses and corbelling.

There are several dormers, some with flat roofs, others with gable-ended pitched roofs; the latter are original, the former date largely from the 1990s. The south-facing front elevation consists of two full-height canted hipped roof bays flanking a shallower central square entrance bay. There is another canted bay to the west elevation with a square bay to the east elevation. The entrance lies within a recessed porch with decorative surround and consists of a tall panelled timber double door and rectangular fanlight, flanked with painted stone rusticated pilasters and sidelights. The porch floor has encaustic tiles.

The windows are generally uniform, with flat heads and plain timber sash frames. Cast-iron rainwater goods. The extension to the east is single-storey with canted bays, with its roof hidden behind a tall parapet. To the north of this is a much larger mainly three-storey extension with canted bays and hipped roof. The building is set within extensive grounds, with a car park to the front and to the west.

A fine example of a late Victorian country house with somewhat eclectic detailing typical of the period. Though greatly extended in recent years the original building is relatively intact and of considerable architectural value. 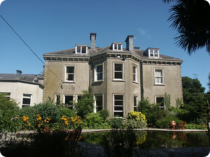 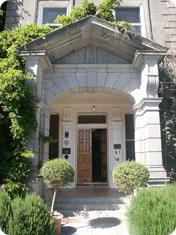