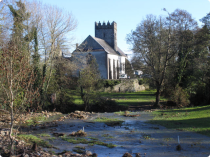 Old Leighlin Cathedral whose original structure was attributed to Donatus as early as 1230AD. The structure was named and dedicated to St Laserian the local patron saint. The architecture of this Cathedral dates from different periods. The nave and chancel are from the 13th Century while the transepts low crossing tower and chapel are 16th Century additions. The Cathedral is constructed from mixed rubble with dressed granite features.

Old Leighlin Cathedral whose original structure was attributed to Donatus as early as 1230AD. The structure was named and dedicated to St Laserian the local patron saint. The architecture of this Cathedral dates from different periods. The nave and chancel are from the 13th Century while the transepts low crossing tower and chapel are 16th Century additions. The Cathedral is constructed from mixed rubble with dressed granite features.

St. Laserian was said to have been of noble birth. He was born around the year 566. His family was of the Ulaid, a Celtic People. Laserian was sent to Scotland to be educated by monks at a very young age. It is not certain at what age that was. He was educated there by a monk called Mundus or Munus As a youth he was reputed to have worked extraordinary miracles. As a young man he lived the life of a hermit on the island (Holy Island) off the coast of the Isle of Arran. He lived in a cell in a cave. This island became known as Molaise's island. St. Laserian is also known as St. Molaise. He worked many miracles there enabling water to flow when it was needed for milling. He also banished robbers from the vicinity of the monastery. Laserian's stay on Holy Island was celeberated subsequently in the area.

From that island, Laserian travelled to Rome. It is not known how long he remained there but it is thought to be about four years. He was in the favour of Pope Gregory the Great and was ordained by him. Laserian then journeyed to Ireland to preach the Faith there.

He founded a monastic community at Old Leighlin in South Leinster in the late sixth century. His choice of location was said to have been inspired by Divine Guidance. Laserian was not the first Christian to settle in the Barrow valley. St. Patrick too, is associated with Leighlin. There is a St. Patrick's Well at Ballyknockan near Leighlin. Other saints were associated with the area. Laserian was reputed not to have settled directly at Old Leighlin. He went first top to Lorum Hill, south east of Muinebheag (Bagenalstown). Here he was directed by an angel to go to where he would see the sun first shining and set up his religious foundation there. The place so chosen was Old Leighlin Hill. Another Holy Well at Lorum is named in honour of Laserian. Laserian crossed the River Barrow and came to Old Leighlin. He found another religious community there before him. The holy abbot Gobanus and his followers were settled there. Immediately Laserian's miraculous powers were manifest and he restored a boy who had been beheaded to life. Gobanus and his community moved on and allowed Laserian to remain at Old Leighlin. The monastery at Leighlin continued to grow. Other Holy Men later to become saints themselves visited Laserian at his Monastery. Among them was St. Finbar of Cork and also St. Molua, who had a monastic settlement at Clonfertmulloe in County Laois.

St. Laserian is said to have died between the years 638 and 641. A story concerning his death refers to his meeting with St. Sillán of possibly County Louth. The tradition tells that a person who would see Sillán's eyebrow would die immediately. St. Laserian on meeting with St. Sillán tried to pluck out the hair but he was struck down. This could be a variant of the "Evil Eye" tale in folklore. It happens that the earliest reference to Laserian refers to his death and is found in the "Martyrology of Oengus", over 1,000 years ago and the date of his death is given there as the 18th of April, which is his feast day.There is a variety of opinion as to where the Saint's resting place lies - some say he was buried under his church at Leighlin or under the High cross in Leighlin and others say that it may have been at Lorum. Other tradition says that he was buried on the Isle of Arran. It could have arisen that part of his remains were interred at Arran as this sometimes happened in Medieval times.

ST. LASERIAN born a noble birth, was educated in Scotland taught by monks.