There are three known manuscript versions of the Mad Sweeney story. The earliest dated of these is held in the Royal Library, Brussels. It was written in the year 1629 by Michael O'Clery, one of the Four Masters.

Another manuscript version is part of the famous Stowe Collection in the Royal Irish Academy in Dublin. It was written between the years 1671 and 1674. It was written by Daniel O'Duigenan, at Sean Cua, Co. Sligo. He was one of the best of the later Irish scribes.

There is a third manuscript version also held in the Royal Irish Academy and this dates from 1721-1722 and attributed to Tomaltach Mac Muirghiosa.

J.G. O'Keeffe says that on linguistic grounds the text may have been composed between 1200 and 1500. In its extant form the story belongs to the twelfth century narrative of the Cycle of the Kings. The Cycle of the Kings in one of the four major cycles of Old and Middle Irish Literature.

Earlier versions have been found too for example in the Book of Aicill which was written in the ninth or tenth centuries. Although the story is thought to have originated in Strathclyde in Scotland in the eighth century the story of Mad Sweeney originates from the old Irish tradition of Suibhne Geilt. The mythical character of Mad Sweeney occurs in the story of the historical Battle of Mag Roth which took place in A.D. 637. 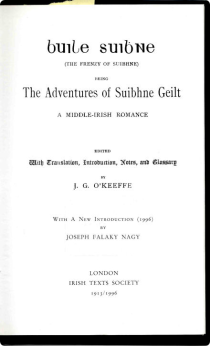 (a) "Buile Suibhne (The Frenzy of Suibhne) being The Adventures of Suibhne-Geilt a Middle-Irish Romance" edited with Translation, Introduction, Notes and Glossary by J.G. O'Keeffe which was published by The Irish Texts Society in 1913.

(b) "Buile Suibhne" as above by J.G.O'Keefe edited with a New Introduction by Joseph Falaky Nagy and published by the Irish Texts Society in 1996.

Previous - The Battle of Mag Rath
Next - The Children of Lir