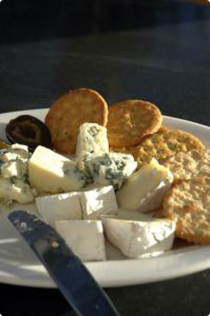 Traditionally, most farmers kept a cow to supply milk and cheese.

Traditionally, most farmers kept a cow to supply milk and cheese.

Historically, dairy products rather than potatoes have formed the centrepiece of the Irish diet. The importance of cows, milk, and milk products is attested to by the historic, archaeological, and folkloric records. Indeed, the central text of the epic Ulster Cycle, an early Irish literary epic which documents the adventures of the hero CuChulainn and the Red Branch Knights, is the Tßin B¾ C·ailnge (The Cattle Raid of Cooley), which tells of a war led by the Connacht queen Medb to steal a famed and fertile stud bull from Ulster. Irish folklore is rife with references to churning butter, and butter was prized as a key economic commodity; a common folk belief was that witches or fairies could “steal the profit” from domestically churned butter, particularly around May Day. Ireland has one of the world’s lowest rates of lactose intolerance.

The importance of dairy products has not faded. Kerrygold butter is a major export, while Irish cheeses are world-renowned. Although there were small-scale cheese making industries before the 1970s, it really developed in Ireland from this time, when a number of people from throughout Western Europe moved into West Cork in search of an alternative lifestyle. They brought their knowledge of traditional farming methods and specialised cheese-making with them. Cork is an epicentre of cheese making: cheese producers in 2012 include Coolea and Coolea herb and garlic, both produced by the Williams family on the Cork/Kerry border; Durrus, produced by Jeffa Gill in West Cork; and the famous Gubeen, produced by the Ferguson family near Schull, Co. Cork.

Pork products are also popular. The “Irish breakfast” may not be particularly healthy, but the combination of pork sausages, bacon, eggs, black pudding (made from spices, pork fat, and pork blood), and sometimes sautķed mushrooms, baked beans, fried tomato, and toast or soda bread, is world-famous. Popular pork brands include Denny’s and Galtee, but smaller brands, including Jane Russell’s Original Sausages and Prue and Simon’s, also make an important contribution to Ireland’s food culture.

Despite the economic downturn, the Irish agri-food sector is still booming. According to figures from An Bord Bia, dairy products and ingredients accounted for 30 per cent of all food exports from Ireland in 2011, followed by beef at 21 per cent.