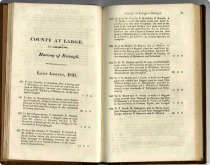 Two pages from the original “Lent Assizes 1831, County at large, Barony of Banagh” Listed are the names of landowners the amounts of money allocated to them to carry our various road repairs in the Ardara area

Two pages from the original “Lent Assizes 1831, County at large, Barony of Banagh” Listed are the names of landowners the amounts of money allocated to them to carry our various road repairs in the Ardara area

At various times in history, fever has been endemic in Ireland, typically following crises such as crop failures Typhus was common, and there were frequent outbreaks of dysentery, smallpox and other diseases. Two things were suspected of spreading disease: the practice of attending wakes and social gatherings. Cholera was endemic in India, but until it moved along the trade routes, it didn't cause much concern in Europe. It reached England in 1831 and by February 1832 it arrived in Ireland. A Cholera Board set up in Dublin issued recommendations about hygiene inside and around the exterior of homes. Nevertheless, this was a disease that struck the able-bodied and in a few hours left them past recovery. There were reports of people driven mad with fear of the disease. Thus began the "Day of the Straws" on Saturday June 9th, 1832, ending on Friday the 15th.

The earliest report of the mass hysteria which was sent to Dublin Castle came from Major General G H Barry, Ballyclough House, Co. Cork. He stated that the Virgin Mary appeared in Charleville church, leaving certain ashes, which she warned were the only protection against cholera. These were to be delivered to four houses, and then these four householders were to proceed to four more homes to spread the message. By the following Tuesday evening, the messengers had reached the borders of Ulster. The message changed on its northerly progression, ashes, turf and stones were used in the east, while straws were used further west. The straw distribution reached Ardara on Thursday June 14th 1832, with a large crowd of locals running into the town bearing lighted straws. However great the pandemonium, there were only two reported acts of violence in the whole country, one being in Ardara where a local constable was wounded in a fracas. Such was the fervour surrounding this project that politicians suspected a sinister motive. By the catholic peasantry. By Friday June 15th, distributors had crossed Lough Foyle into County Derry, prompting Robert Ramsay, the "Bard of the Swilly" to write in the "Londonderry Sentinel":

With holy straws the Popish millions

Were put in motion

And traversed Erin's Isle unto the ocean."

However, all these efforts didn't stop the spread of cholera, as the disease killed 50,000 between 1832-1834. Storytellers interviewed in the 1930s by the Folklore Commission had heard that it was a device invented by the "Liberator" Daniel O'Connell to ascertain just how quickly he could spread a
message throughout Ireland.

Perhaps the speedy delivery of this message was down to the good state of the roads around Ardara! Shown here are details from the Lent Assizes for the Ardara area (Barony of Banagh) 1831. Listed are the local landlords, names associated for generations with this area – Colonel Connolly, Rev. Montgomery, Earl Mountcharles, Earl Mansfield, J. E. Nesbitt etc., who received payment for repairs to local roads and bridges.

Previous - Ardara Fairs and Markets
Next - Problems in Ardara in 1926

Apparition in Ireland before Knock?

Was there an apparition in Ireland before ‘Knock’ ? There was a report of an apparition In Ireland in June 1832. “It became known as the day of the straws”. Storytellers interviewed in the 1930s by the Folklore Commission had heard that it was a device invented by the "Liberator" Daniel O'Connell to ascertain just how quickly he could spread a message throughout Ireland. I consider it unlikely that Daniel O’Connell would invent such a story. Perhaps the Blessed Virgin did appear. I read about this apparition some years ago. It was supposed to have happened in a church there. Then when in Charleville I photographed the churches. The photograph below is one I took of the building that used to be the Protestant church.

Apparition in Ireland before Knock?

This building is now used as a library.