Colour photograph of the circle of stones at Beltony, Raphoe, Co Donegal

Colour photograph of the circle of stones at Beltony, Raphoe, Co Donegal 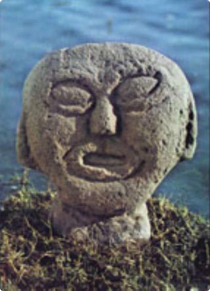 Colour photograph of the carved stone head from the stone circle at Beltony, Raphoe, Co Donegal

Colour photograph of the carved stone head from the stone circle at Beltony, Raphoe, Co Donegal

On the summit of Beltony Hill, just over a mile from Raphoe there stands one of the finest stone circles in Ireland. Reputedly older than Stonehenge, it consists of 64 standing stones out of an original 80. The stones range in height from 4ft to 9 ft (1.2-2.7 metres) while the diameter of the circle is 145 ft (44.2 metres). To the S E of the circle is a standing stone 6ft (2 metres) high. Beltony is a corruption of Baal tine, the fire of Baal; this suggests that the inhabitants of this area worshipped Baal, the sun god, and ruler of nature. Tradition tells us that the principal ceremonies were performed at the summer solstice; a sacred fire was lit in the centre of the circle of stones, which represented the stars and fire of the sun god Baal.

The Irish word for the month of May is Bealtine, and on the first day of this month two fires were lit. Cattle and other domestic animals were driven between the fires, so as to gain protection against diseases. This custom has parallels in Scotland and Brittany. One romantic tale suggests that the outlying stone represents a musician, while the circle of stones is dancers turned to stone for their revelry during the Sabbath.

A more credible theory suggests that this arrangement of stones as well as other features of the adjacent horizon were used by these ancient peoples to determine astronomical alignments; various alignments have been pointed out including the winter and summer stolicices, the spring and autumn equinox and the early November sunrise marking the beginning of the Celtic festival of Samhain. However the most persuasive alignment must be from the tallest stone at the S W to the triangular stone decorated with cup marks at E N E.

This alignment points to a small hill about five miles away known as Tullyrap, where the sun rises over its small summit in the first day of May, the Celtic festival of Bealtine from which this stone circle gets its name.

Raphoe Community in Action group, with funding from the Heritage Council of Ireland have been engaged for the past two years in an archaeological research project at the Beltony Stone Circle. The aim is to ascertain if this enigmatic monument was a great passage tomb, a ritual site for the celebration of the changing seasons, or an astronomical calendar for neolithic farmers. So strong were pagan practices in this area that as late as the C13 papal documents refer to laymen being censored for worshipping idols of stone. On October 7-9, the Raphoe Community in Action group hosted a weekend conference: "Beltony – rediscovering an ancient landscape" in which leading archaeologists and historians presented their views in a journey of discovery from the earliest times to the early Christian period.

Map of Co Donegal and Raphoe

Two maps, one showing Raphoe’s position in Co Donegal, the map below is an outline of the main roads into the town, the streets, historic buildings, and the road to Beltony stone circle.