The new beginning had problems from the outset. The rhetoric of the Union proclaimed Ireland to be a ‘normal’ part of the United Kingdom , but the structure of governance and the actuality of the country demonstrated that it was not. The population expanded rapidly in the first decades of the Union and most growth was in the subdivided tiny tenant plots of the Irish-speaking areas of the western seaboard; though the law, commerce, society and the state operated in English most of the rural poor in the western half of the island spoke Irish, even if many of them were bilingual.

The practices of agrarian secret societies, tithe-protests, whiskey distilling and faction fights made Ireland very alien in English eyes. The state developed a series of strategies to make rural Ireland more amenable to what was presented as a British norm. National schools where all teaching was through English were introduced in the 1830’s, thousands of stills were closed, the country was remapped and renamed through the Ordnance Survey and an armed police force supported the magistracy.

Habeas corpus was more often suspended than not, and national politics polarised as Daniel O’ Connell created a new mass politics through his globally unprecedented mass-movement for Catholic Emancipation. The catholic elite might have placed its influence with the new order had the denial of Emancipation not driven them into the arms of their catholic lower-class coreligionists. O’ Connell’s campaign politicised the country around support or opposition to emancipation, and Brunswick Clubs and Orange lodges passionately opposed it. The London government conceded Emancipation with bad grace in 1829, but by then a popular catholic mass-movement was in being. Sections of Protestant Ireland began to doubt the efficacy of Union as a vehicle for the protection of their interests. 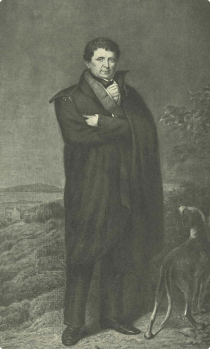 
O’ Connell’s second aim was repeal of the act of Union, though he alternated this policy with a willingness to cooperate with the Whig party for the achievement of specific aims and patronage. Irish estates were in many cases enormous- the Lansdowne and Kenmare estates numbered tens of thousands of acres. No Virginia landowners owned estates on an Irish scale, but the structure of rural society was far from simple. Many of these enormous estates were let and sub let and sub let again. Landlords were often tenants of larger operators, and were at every level of the social scale and of all religions. At the bottom of this complex pyramid lived millions of landless men and their wives and children who barely subsisted on conacre.

The Irish poor were able to live healthily on little but the potato. The Irish rural poor, when they joined the British army were healthier, taller and fitter than others in the UK because of their diet. Travellers however commented on the appalling poverty of the Irish countryside. Landlords in general, except in Ulster , Leinster and odd locations in Connacht and Munster invested little and simply withdrew their rents. There was little industrialisation. Dublin declined as a commercial capital. Rural Catholicism was traditional; wakes, patterns, saints days and the stations were the practices through which Catholicism was practiced. However, the catholic church worked assiduously and successfully to replace this Irish Catholicism with a more ‘normal’ Roman variety. 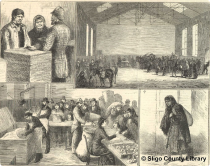 The blight of 1845 that lasted in varying degrees for four years eviscerated large swathes of rural Irish society. George Petrie said that ‘An Gorta Mor’, the Great Hunger, silenced the Irish countryside. The rollicking, disorderly, musical, violent, partying society so despaired of in William Carleton’s stories was no more. With a failed potato crop the rural poor had no means to live. ‘Normal’ political economy dictated that grain continued to leave Irish shores, sections of Irish agriculture remained as before, but the rural poor starved in their own homes, in the green fields, and on the roadsides. Government policy changed from year to year and from Whig to Tory. The repeal of the Corn Laws framed the tragedy. Private relief agencies, some landlords and government ran soup kitchens and in some cases assisted emigration. Starvation was rampant, diseases like cholera and typhus spread and the huge new workhouses were crammed with the rural poor. Judgements on the culpability of the government, local poor law guardians, and landlords through their concerns about the rates still provoke little consensus and great disagreement. What can be said with confidence is that the rural poor who made it out of the sinking ship that was Ireland in these years brought with them to America and Canada a conviction that British rule in Ireland was to blame for the famine and the deaths, if not for the blight. John Mitchell stated what many believed when he said the though God had sent the blight the British government was responsible for the famine.

Over a million died of hunger and disease in Ireland and on the famine ships to America . Another million emigrated. The cottier class were effectively wiped out by death and the Gregory clause. The population of Ireland had been nearly 8 million in the 1830’s; by 1900 it was around 4 million, making Ireland a demographic aberration in western European terms. A pattern of rural emigration developed that was to make it more likely than not that if you were born in Ireland you would die abroad. Emigration became the central feature of Irish life for the following century and beyond.

The structure of Irish rural society was changed. The Catholic church developed greater control in a society haunted by providentialism. Survivors carried a bitter and complex legacy of the horrors that they had seen into the future

A new political nationalism, based on O’ Connell, but carrying forward ideas of a non-sectarian republicanism was popularised by Young Ireland. O’ Connell died with Repeal unachieved, but it continued to resonate in certain circles, circulated through Young Ireland libraries, popular histories and new stories of the horrors of English rule. John Mitchell, William Smith O’ Brien, John Francis Meagher were exiled or transported for their part in the 1848 Young Ireland rebellion but in their way James Finian Leloir linked their separatist message to a new post-famine argument that linked the land and the ownership of the land to political freedom.

Previous - 1798 and the Act of Union
Next - Victorian Ireland

The following is a short film documentary on the Great Famine period that focuses on the town of Kilrush located in West Clare. Kilrush will host the Famine Commemoration this year. 10 days of events including educational and artistic activities will take place in the town. Link to the film : https://www.youtube.com/watch?v=cLisBWPnPiE