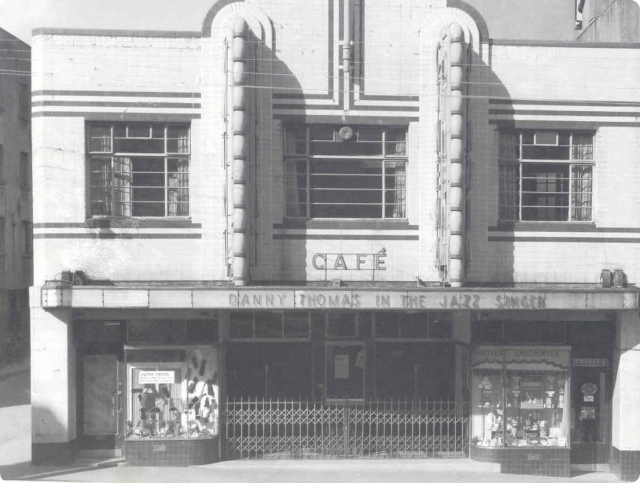 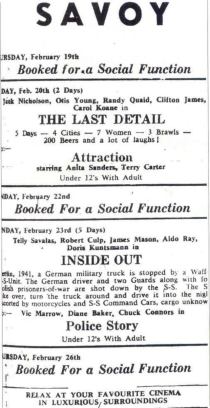 The final cinema programme for The Savoy Cinema. The cinema closed in 1976. Supermac's and The Book Centre now occupy the site where The Savoy once stood

The final cinema programme for The Savoy Cinema. The cinema closed in 1976. Supermac's and The Book Centre now occupy the site where The Savoy once stood

The Savoy was Waterford's second cinema. It was originally called The Broad Street Cinema. Waterford's first talking film was screened here in 1929.

In 1937 The Broad Street Cinema was replaced with a larger modern building which became known as 'The Savoy Cinema' The first film shown was 'Rose Marie' starring Jeanette McDonald and Nelson Eddy. This was a very upmarket modern cinema and this was reflected in the prices charged. The Savoy opened amid much publicity and the entire takings for the first night were donated to the Ballybricken New Church Building Fund.

The hard timber seats were replaced by upholstered individual seats. The Waterford News of 10th Dec. 1937 described the seats as 'Rivalling those to be found in the most modern and luxurious theatres, the seats are the very acme of comfort. They are the patent 'Hilltonia' sprung super-cinema chairs. They are beautifully upholstered in green crushed velvet and have been manufactured throughout, supplied and fitted by Irish trade union labour.' Another new feature of The Savoy was continuous performance with matinee prices up to 5pm. This new cinema also included a café.

The Savoy Cinema closed in June 1976 with the loss of 10 jobs. Today Supermacs and the Book Centre occupy the site where the Savoy once stood.

Previous - The Regal
Next - The Regina