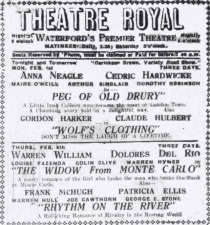 Another of Waterford's early cinemas was the Theatre Royal. The gallery of The Theatre Royal was up in the rafters and the seats were planks of wood raised about six inches from the floor. The screen was quite a distance away and sometimes proved quite difficult to see. Nevertheless it was and still is a magnificent theatre

As well as showing films, The Theatre Royal was also a venue for live shows The Theatre Royal had a quaint old world atmosphere about it. There was a glass chandelier hanging from the dome which cast coloured lights throughout the whole interior of the theatre.

Previous - The Coliseum
Next - The Regal