In the 1930s and 1940s there were four cinemas in Waterford. The Coliseum, The Theatre Royal, The Regal and The Savoy. There was a daily matinee show in all four cinemas. It cost 2d for a standard ticket in the balcony or gallery and there were various charges for the stalls. All the cinemas closed during Holy Week each year. 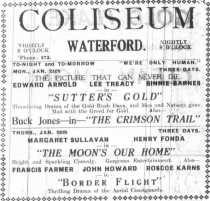 Programme of films shown in The Coliseum in January 1937.The Coliseum opened as a cinema in Waterford in 1913

Programme of films shown in The Coliseum in January 1937.The Coliseum opened as a cinema in Waterford in 1913

The Royal and The Regal cinemas showed serials, often screening one episode of a show each week. In each sitting these cinemas would also show just one film and many short films. The Coliseum and The Savoy screened two films. A 'B' film would be shown first followed by a main feature film. A 'B' film is a low budget film.

Jack O'Neill remembers in his book Waterford Miscellany that 'during the interval between the first showing and the feature film, the lights were switched on in the house and girls from the cinema shops attached to the Savoy and Regal paraded along the aisles with trays of chocolates, cigarettes and fruit suspended with a belt across the shoulders. Filmgoers were encouraged to buy while the interval lasted.'

Cinema was very popular with the young people of Waterford. Every Saturday afternoon they queued for admission to 'The Gods' of the four cinemas. The 'Gods' were the cheap seats upstairs. Although the admission price of the matinee was only 2d, sometimes it was quite difficult for young people during the 1930s and 40s to raise the price of a trip to the cinema.

On the first Monday of each month the Fair was held in Ballybricken and this provided a great opportunity for young people to earn some money to pay for their outing to the cinema. Farmers would employ young boys to look after their stock during the day and perhaps drive them to the railway station later on in the evening. The wages could be as much as 6d for the day's work.

Previous - Cinemas
Next - The Coliseum