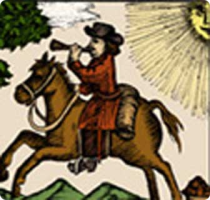 Printed news sheets began to be circulated in Germany in the second half of the 15th century and in London, Paris and the Netherlands in the 1620s and 1630s. News sheets associated with the Confederate War in Ireland were first issued in Ireland in the 1640s, printed in Waterford, Cork and Kilkenny, but regular printed news sheets were not issued until the 1680s. In 1685, the first genuine Irish newspaper, The News-Letter, was printed in Dublin by Joseph Ray, printer and bookseller in College Green, for Robert Thornton at the Leather Bottle in Skinner Row. A half sheet folio printed on both sides, it was devoted to foreign affairs and political intelligence.

Subscribers to early newspapers were parliamentarians and men involved in trade and commerce. In the early part of the 18th century there was a close connection between printing office and coffee house; many printers had their premises next door or in the same building as a coffee house. In Dublin and other Irish towns, they were the gathering places for those in search of the latest news. Foreign newspapers, used by the printer as copy, were made available to the coffee house clientele. Throughout the 18th century, coffee houses prided themselves on the variety of newspapers that they received.