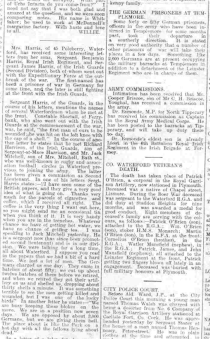 Mrs. Harris, of 45 Poleberry, Water ford, has received some interesting letters from her sons, Sergeant Benjamin Harris, Royal Irish Regiment, and Sergeant James Harris, of the Irish Guard (Second Division), both of whom went out with the Expeditionary Force at the out break of the war. The first-named has been a prisoner of war in Germany for some time, and the later is still fighting at the front with the Irish Guards.

Sergeant Harris, of the Guards, in the course of his letters, mentions the names of several Waterfordmen whom he met a the front. Constable Shortall, of Ferrybank, who also went out with the Irish Guards at the commencement of the war was, he said, "the first man of ours to be wounded; he was hit on the left knee with the cap of a shell. In the course of another letter he states that he met Richard Harrison, of the Irish Guards, son of Sergeant-at-Mace Harrison, and Mr. Jack Mitchell, son of Mrs. Mitchell, Bath st. who was well-known in rugby and association football circles in Waterford previous to joining the army. The latter has been given a commission as Second Lieutenant. In one of his letters Sergt. Harris states :-"I have seen some of the British papers, and they give a very good i dea of what is going on. Thanks very much for the parcels of cigarettes and coffee, which I received all right. The coffee is the very thing I want out here, so you might send me an occasional tin when you think of it. It is very handy when you are in the trenches. Whatever chance we have of getting hot water, we have no chance of getting tea. I was speaking to Jack Mitchell yesterday. He is a sergeant now (has since been promot- ed second lieutenant) and is in our division. We were talking for a long time, all about Waterford. I suppose you read in the papers that we had a bit of a hard time We lost a lot of men The Germans charged us one day. They came in batches of about fifty; we cut up about twelve batches of them before we retired, and when we retired they got their artillery on us and shelled us, dropping about thirty shells a minute.  It was something terrible to see the men getting killed and wounded, but I was one of the lucky birds." In a another leter he states:- "We are keeping the blokes on the move.  We are in a position now seven days.  We are opposed by about 3000 Germans, but we are giving them hell.  The place is like the Park on a hot day with all the fellows lying about dead."

THE GERMAN PRISONERS AT TEMPLEMORE. Some forty or fifty German prisoners, officers in the army who have been interned in Templemore for some months past, took their departure in a southerly direction. It is stated on very good authority that number of other prisoners of war will take their places in a few days. Something like 2,000 Germans are at present occupying the military barracks at Templemore in addition to a detachment of the Leinster Regiment who are in charge of them.

ARMY COMMISSIONS.
Intimation has been received that Mr Cooper Briscoe, son of Mr C. H. Briscoe Youghal, has received a commission in the army. Dr. Esmonde, M.P. for North Tipperary has received his commission as Captain in the Royal Army Medical Corps. He has been posted to the barracks at Tip- perary, and will take up duty there today. Dr. Esmonde’s eldest son is already Lieut. in the 6th Battalion Royal Irish Regiment, in the Irish Brigade at Fermoy.

CO. WATERFORD VETERAN’S DEATH.
The death has taken place of Patrick O’Brien, a corporal in the Royal Garrison Artillery, now stationed in Plymouth. Deceased was a native of Chapel street, Lismore.  During the Boer War deceased was sergeant to the Waterford R.G.A. and did duty at Staddon Heights for nine months, and was awarded a medal for good conduct. Eight members of deceased’s family are serving with the col- ours, as follows :- Patrick O’Brien (son), attached to the R.G.A.; Wm. O’Brien (son), stoker H.M.S. Monarch; Martin O’Brien (son), in the R.F.A. at the front; Cornelius O’Brien (brother), in the R.G.A. ; Watler Mansfield (nephew), in he R.G.A.; Patrick, James, and John Mansfield (nephews), all attached to the Leinster Regiment at the front, Patrick getting two fingers blown off lately in an engagement. Deceased was buried with ull military honours at Plymouth.

CITY POLICE COURT.
Before Ald. Ward, J.P., at the City Police Court this morning ,  a young man named Thomas Walsh was charged with being a deserter from No. 6 Company of the Royal Garrison Artillery stationed at Carlisle Fort, Co. Cork. He was apprehended yesterday by Sergeant Storey at the house of a man named Thomas Henessy, Peter-street. He was in plainclothes at time and attempted to ....