Kilkenny County Library
Enlarge image
The Cuffe’s family’s first association with Ireland dates from Elizabethan times when Captain John Cuffe was killed in Ireland fighting for the Queen. His nephew, Hugh Cuffe received a grant of lands in Cork and Clare for services to the Queen. It is from his brother Philip that the Cuffes of Desart are descended.
His grandson Joseph Cuffe was a Cromwellian and received a grant of 5,000 acres in the Barony of Shillelogher in Kilkenny. This grant formed the estate of Desart. His son Agmondesham Cuffe was a supporter of William of Orange. These astute political allegiances meant that his son, John Cuffe, 1st Lord of Desart had the resources and security to commission the building of the large house that would become the family seat – Desart Court in 1733. His grandson Otway Cuffe was created Viscount Desart in 1781, and advanced to the Irish Peerage as the First Earl of Desart in 1793.

Kilkenny County Library
Enlarge image
The Earl was succeeded by his only son also Otway in 1804. He married Catherine O’Connor, a member of an old Irish family in Offaly that had conformed to the Established church in the wake of the Cromwellian invasion. In 1818 she bore him a son John Otway O’Connor Cuffe. However the 2nd Earl died in 1820 leaving his two year old son as his heir. The dowager Countess remarried in 1826 but her second husband Rose Lambert Price was to die within two years of the marriage. The 3rd Earl, John was educated at Eton and Oxford. He married Lady Elizabeth Campbell and spent most of his time in England. His mother, the dowager Countess continued to live in Desart Court. He had four children, William Ulick O’Connor Cuffe who was to become the Fourth Earl, Hamilton Cuffe, who was to be the Fifth Earl and Otway Cuffe along with a daughter Alice. He died after a riding accident in 1865.
The Fourth Earl, William after an early military career married Maria Emma Preston. The marriage was not a happy one ending in divorce in 1878. They had one daughter, Lady Kathleen Cuffe. During this period the Desarts spent most of their time in England, Desart Court was mainly used for recreation - hunting and shooting. His second marriage to Ellen Biscoffscheim, the Jewish heiress rumoured to have a dowry of £150,000 was a happier one. Large crowds turned out in Kilkenny to greet the Earl and his new bride in 1881. The Earl spent most of his time hunting and shooting. The outbreak of agrarian unrest in Ireland in 1884 lead to the Earl closing up Desart Court and relocated to England until his death in 1898. 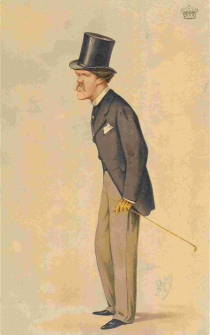 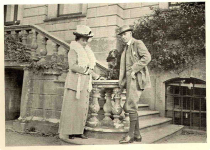 5th Earl and Countess of Desart

5th Earl and Countess of Desart

Property of Kilkenny County Library
Enlarge image
He was succeeded by his brother Hamilton John Agmondesham Cuffe as the Fifth Earl. He married Lady Margaret Lascelles and had two daughters. One, Lady Sybil Lubbock., recalled his life in her memoirs – ‘A page from the Past’ published in 1940.
Initially, Ellen the previous Countess of Desart refused to leave Desart Court, eventually she did, and the Fifth Earl and his family took up residence in 1899. He spent the next twenty years restoring the neglected house and grounds. After 1903, he sold most of the lands around Desart to his tenants retaining just the House and gardens.

His brother Otway Cuffe had also returned to Kil ken ny in 1898. As his bother had no son, he was now the heir to the Earldom. He took up residence in Sheestown House, just outside Kil ken ny City . Unlike his brothers Otway was an enthusiastic embracer of all things Irish. He became president of the Gaelic League in 1904. He was also president of the Kil ken ny Drama Club and acted himself. He also encouraged the revival of traditional