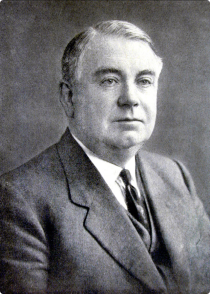 Thomas Aloysius McLaughlin, physicist and electrical engineer, was born in 1896 at Drogheda.

Thomas Aloysius McLaughlin, physicist and electrical engineer, was born in 1896 at Drogheda.

Thomas Aloysius McLaughlin, physicist and electrical engineer, was born in 1896 at Drogheda. Appointed to the staff of University College, Galway, to teach physics, he found time to complete a B.E. in Electrical Engineering in 1922. About the same time, his researches on the behaviour of gas bubbles in a fluid subjected to the action of an electric field were completed and he was awarded a Ph.D. Degree in 1923. However, before this had been conferred, McLaughlin embarked on an engineering career, in November 1922 joining the firm of Siemens Schuckert in Berlin as a trainee.

During his time in Berlin, he became aware of the growing importance of hydro-electric power and of the hydrometric data available in Ireland. With this knowledge a scheme was prepared for the supply of electricity all over Ireland, using a single hydro-power station and a high tension distribution system. McLaughlin convinced the Irish government that a national solution was preferable to a local one. The contractor's proposals for a hydro-electric power station at Ardnacrusha in County Clare were examined and approved by experts from Switzerland and Sweden. A large 'teutonic' style industrial building of some antiquity nestling beside a tranquil stretch of the River Shannon near Limerick recalls the early days of the foundation of the Irish Free State. This is the power house of the 'Shannon Scheme', as it became known, part of one of the greatest civil engineering projects ever completed in Ireland. Of equal importance to the success of the scheme was an electricity grid, stretching all over the country, rural electrification becoming the essential framework on which was built the social, economic and industrial development of the country. The Shannon Scheme was formally opened by Prime Minister Cosgrave on the 22nd July, 1929.

From 1925 when construction of the scheme began McLaughlin served as Managing Director for Siemens in Ireland but transferred to the Electricity Supply Board (ESB) on its establishment in 1927. In later years when the appointment of full-time directors to the Electricity Supply Board ceased, McLaughlin engaged in a wide scope of business activities ranging from civil engineering contracting, pharmaceuticals and oil distribution.

McLaughlin is often referred to as the "Founding Father of the ESB."

Thomas McLaughlin died in 1971 whilst on holiday in Spain.