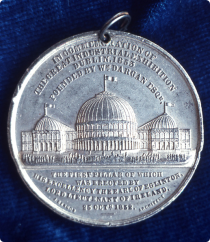 A specially struck medallion, commemorationg the 1853 exhibition which mentions William Dargan as the exhibition founder

A specially struck medallion, commemorationg the 1853 exhibition which mentions William Dargan as the exhibition founder

The 1853 International Industrial Exhibition, which ran from the 12th of May until the 31st of October 1853, was the most extravagant and expensive public event of nineteenth-century Ireland.

It was the first international industrial exhibition to be held in the world after the ground-breaking London Exhibition at the Crystal Palace. Hundreds of thousands of Irish men and woman attended.

The exhibition itself financially ruined William Dargan (Ireland's greatest railway engineer and promoter of the exhibition) but laid the foundation for the construction of the National Gallery of Ireland.

The story of the exhibition is told using images from contemporary exhibition programmes held at the Dublin City Library & Archive, Pearse Street.