This was the last Cistercian Abbey to be founded in Ireland in medieval times. It was originally built by the Benedictines. They, however, were evicted from the site by Archbishop David McCarvill, who, in a fit of paranoia, imagined that the Benedictine monks had hatched a plot against him. Cistercians from Mellifont, an order considered to be more fashionable at that time, promptly replaced them. At the height of its power, the Abbey laid claim to nearly 400 acres and, charmingly, "a measure of ale out of every brewing" in the town.

The Abbey, which is dedicated to St. Mary, gets its name from the Irish translation of An Mainistir Liath (grey abbey). The name also refers to the colour of the Cistercian habit, which was a similar shade to that of hoar frost.

View of Hore Abbey, with bystanders in the foreground

View of Hore Abbey, with bystanders in the foreground

The Abbey comprised of a cruciform Gothic church with chapels in each transept and an aisled nave. To the north of the chapel was the square cloister and living quarters. A tower was constructed at the crossing of the church in the 15th Century, and as well as housing a bell, it served as a fortification for the Abbey. The groined ceiling over the crossing is in a very good state of repair, and is an excellent illustration of the gracefulness of Gothic architecture. 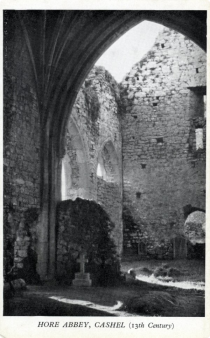 View of the interior of Hore Abbey, as seen from the crossing of the Church

View of the interior of Hore Abbey, as seen from the crossing of the Church

The 1400s: Chopped and Changed

During the 15th Century the church was also reduced in size, as blocking walls cut off more than half the nave and both the transepts. The remainder of the nave was then converted into a large dwelling, evidence of which can be seen in the blocked arches and windows, and the remains of a fireplace.

The Dissolution of 1541 spelled an end for Hore Abbey, as it also did for the Franciscans and Dominicans in Cashel. Only the then Abbot, Patrick Stackpool, and one other monk were granted pensions, a poor reward for the residents of an establishment that had enjoyed such affluence. In 1561 Elizabeth I granted the Abbey to Sir Henry Ratcliffe.

Hore Abbey is today under the care of the Office of Public Works and is open to visitors.