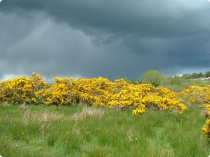 Gorse (Ulex europaeus) is beginning to take over this wet meadow. If left unchecked this wet meadow habitat will eventually develop into scrub. In time this will lead to a change in species composition from one that was predominantly grass and herbaceous plants to one that is mainly woody.

Gorse (Ulex europaeus) is beginning to take over this wet meadow. If left unchecked this wet meadow habitat will eventually develop into scrub. In time this will lead to a change in species composition from one that was predominantly grass and herbaceous plants to one that is mainly woody. 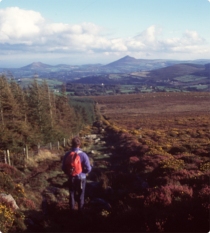 Let us get the bad news out of the way:
The first fact to remember is that, unlike the nordic countries, there is no legal, traditional right of access even to uncultivated hillsides in the Republic of Ireland. Article 40.3.2 of the Constitution of 1937, drafted at a time when Communism was the great bogie, copper-fastened the right of the property owner to unfettered use of the property. Many unconsidered results have flowed from this Article, but for recreational users, the important one is that a landowner can refuse access to his property. In Northern Ireland, without a Constitution, the situation is still roughly the same.

The second fact is that in both jurisdictions in Ireland, 'commonage' means private property held jointly by a number of owners. This is unlike Britain where the same term is used for areas which are the common property of all.

The effect of these facts is that walkers in Ireland have very limited areas to which they have legal access, as opposed to customary access.

However, in practice the situation is better. For many years there was rarely a difficulty in crossing farmers' land. Obviously walkers did not (and should not) stray into gardens, yards, cultivated land, good meadows, but otherwise access was not a problem, and many farmers were glad of a chat.

Unfortunately access to the Irish countryside is gradually becoming more difficult, the reasons for this include:

This is particularly true of the West of Ireland where holdings are small and income is small. Attempts have been made to deal with some of these problems. The Occupiers Liability Act 1996 seemed to have fixed responsibility for their actions and safety firmly on 'recreational users', but a recent court award in Donegal has raised worries again. 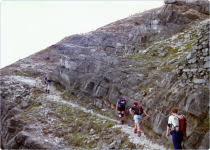 Photo by Milo Kane The Miner's Track, near the plateau on top of Muckish Mountain.

Photo by Milo Kane The Miner's Track, near the plateau on top of Muckish Mountain.

Under the EU-funded REPS scheme, Supplement 5 gave a farmer a payment if he permitted new access for recreational users. However this payment was stopped by the EU who went further and banned any payment simply for access not only from EU funds but also from State funds.

Clearly, there is a situation which will most likely only get worse and there must be positive action to change it. Two courses have been suggested - change the Constitution or invoke Art 43.2.2 which provides for 'the delimit by law of property rights for the common good'. The latter is preferable - changing the Constitution would be slow and difficult procedure.

The access which walkers and other recreational walkers seek is, in the main:

This access to be coupled, for the farmers involved, with:

Finally user organisations to provide education in the sustainable and responsible use of the countryside.

Much progress can be made where there are partnerships bodies such as the Wicklow Uplands Council(*) which bring together farmers, recreational users, community and local tourism. The Irish Uplands Forum is working towards the formation of similar partnerships in other parts of the country.

Recreational users such as the Mountaineering Council of Ireland (*) are firmly convinced that progress towards better access will be made by co-operation rather than confrontation.

Previous - The Countryside
Next - Hill Walking