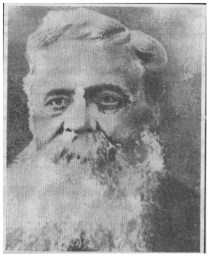 Michael Cusack founder of the G.A.A.

Michael Cusack founder of the G.A.A. 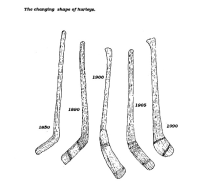 A drawing of five hurls demonstrates the changing shape of hurls from 1850 to 1990.

A drawing of five hurls demonstrates the changing shape of hurls from 1850 to 1990.

The model of elite participation in popular culture is a threefold process: first immersion, then withdrawal, and finally rediscovery, invariably by an educated elite, and often with a nationalist agenda. 'Rediscovery' usually involves an invention of tradition, creating a packaged, homogenised and often false version of an idealised popular culture. The relationship of hurling and the newly established Gaelic Athletic Association in the 1880s shows this third phase with textbook clarity. Thus, when Michael Cusack set about reviving the game, he codified a synthetic version, principally modeled on the southern 'iomán' version that he had known as a child in Clare. Not surprisingly, this new game never caught on in the old 'commons' area, with the Glens of Antrim being the only major exception.

Cusack and his GAA backers also wished to use the game as a nationalising idiom, a symbolic language of identity filling the void created by the speed of anglicisation. It had therefore to be sharply fenced off in organisational terms from competing 'anglicised' sports like cricket, soccer and rugby. Thus, from the beginning, the revived game had a nationalist veneer. Its principal backers were those already active in the nationalist political culture of the time, classically the I.R.B. Its spread depended on the active support of an increasingly nationalist Catholic middle class and as in every country concerned with the invention of tradition, its social constituency included especially journalists, publicans, school teachers, clerks, artisans and clerics. Thus, hurling's early success was in south Leinster and east Munster, the very region which pioneered popular Irish nationalist politics from the O'Connell campaign, to the devotional revolution in Irish Catholicism, from Fr. Matthews' temperance campaign to the Fenians, to the takeover of local government. The GAA was a classic example of the radical conservatism of this region conservative in its ethos and ideology, radical in its techniques of organisation and mobilisation. The spread of hurling can be very closely matched to the spread of other radical conservative movements of this period, such as the diffusion of the indigenous Catholic teaching orders and the spread of co-operative dairying.

It would, however, be a mistake to see the spread of hurling under the aegis of the GAA solely in nationalist terms. The codification and success of Gaelic games should be compared to the almost contemporaneous success in Britain of codified versions of soccer and rugby. All these were linked to rising spending power, a shortened working week (and the associated development of the 'weekend'), improved and cheaper mass transport facilities which made spectator sports viable, expanded leisure time, the desire for organised sport among the working classes, and the commercialisation of leisure itself. The really distinctive feature of the GAA's success was that it occurred in what was still a predominantly agrarian society. That success rested on the shrewd application of the principle of territoriality.