According to the latest Assessment Report (AR5) from the Intergovernmental Panel on Climate Change (IPCC), warming of the climate system is unequivocal. Many of the observed changes since the 1950s are unprecedented over decades to millennia. The atmosphere and oceans have warmed, the amounts of snow and ice have diminished, sea level has risen, and the concentrations of greenhouse gases have increased. In fact, each of the last three decades has been successively warmer at the Earth’s surface than any preceding decade since 1850. 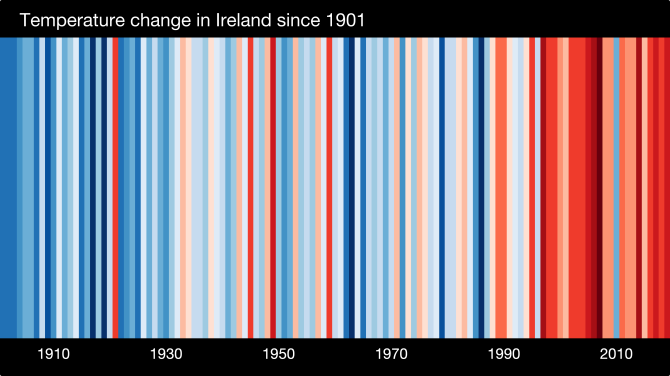 Ireland’s climate, even in the last 20 or so years, has seen a noticeable change in temperature.  The temperature stripes graphic shows the annual difference from average, with many of the warmest years in history occurring in the past two decades. One of the consequences of climate change has been higher rainfall recorded in the west, south-west and north of the country. Examine more graphs like this one here.


In fact, six of Ireland’s warmest years on record have already occurred since 1990. In Valentia during 2007, they recorded the warmest year since records began in 1892. Indeed, in the last three decades an increase in temperature of 0.42°C per decade has been seen, compared with an increase of 0.23°C per decade between 1910 and 1949. 2019 is now set to be the hottest year recorded, with July being the hottest month recorded globally.

If climate change continues at this pace, increased global temperatures will result in dangerous and irreversible impacts on our planet. The challenge for us all, in Ireland and elsewhere, is to limit and adapt to climate change.