The food market worldwide is likely to be considerably altered by climate change. Biofuels are becoming an increasingly popular choice in helping to reduce GHG emissions and combat climate change, but this has implications for global food supplies, as well as food prices. The spread of crop pests is likely to rise together with the global temperature, and extreme weather conditions are predicted to have detrimental effects on agriculture around the world. 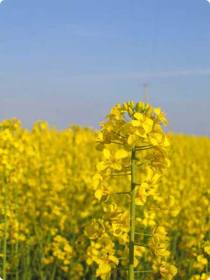 Rapeseed oil, also known as oilseed rape, is used in the manufacture of biodiesel. It is usually combined with fossil fuel diesel, but can also be used on its own. In comparison to other oil sources, such as soya beans, rapeseed produces more oil per acre of land. Growing biofuels changes land usage patterns. The more biofuels that are grown, the less land there will be for growing food crops. This leads to concerns of future global food shortages.

Rapeseed oil, also known as oilseed rape, is used in the manufacture of biodiesel. It is usually combined with fossil fuel diesel, but can also be used on its own. In comparison to other oil sources, such as soya beans, rapeseed produces more oil per acre of land. Growing biofuels changes land usage patterns. The more biofuels that are grown, the less land there will be for growing food crops. This leads to concerns of future global food shortages.

Biofuels and food supply: The more environmentally conscious we become the more we strive to find alternatives to fuels that harm our atmosphere, fuels that meet the requirements of being both portable and clean burning.

Replacement ‘biofuels’ are derived from natural sources such as maize and sugarcane, and plants like rapeseed (used to make vegetable oil). This means that we are now using food crops for other uses. While biofuels have a role to play in the fight against climate change, the issue of global food shortages comes into play as a direct result of their existence.

From about 2000 onwards global grain stocks began to decline drastically. It was proven that global use of grain had overtaken its actual production. World cereal supplies in the 2020 season are expected to reach a record high level of 2,742 million tonnes, 1.3 percent above the previous year’s outturn (FAO, 2020).

Crop pests: Warmer climates will also mean the spread of parasites and pests, blighting crops and trees. Human activities are often a major contributing factor in the spread of these creatures. Proper sewer systems and waste management, chemical pesticides and field burning are all known methods of pest control. However, these methods are often harmful to humans and the environment, or are simply not effective enough.

Extreme weather conditions: Examples of the effects of extreme weather conditions on agriculture around the world are increasing steadily. In the summer of 2010, a heatwave in Russia is estimated to have cost the economy €15 billion and may have led to 5,000 deaths. In addition, thousands of acres of crops were destroyed and fodder prices rose rapidly. In late 2010 and early 2011, parts of Queensland, Australia experienced severe fluvial flooding. Thousands of homes and business were destroyed and some towns were submerged as many rivers burst their banks. The Australian Bureau of Agriculture and Resource Economics and Sciences also estimated that the floods reduced agricultural production by $500 - $600 million. In the US, the year 2017 witnessed one of the most costly hurricane seasons which contributed to the highest documented economic losses at approximately $320 billion. Heatwaves, droughts and other extreme weather events are projected to increase across most of the planet in the future.

While Ireland is relatively self-sufficient in meat, dairy and fresh produce, climate change will impact on agricultural production. Due to expected water shortages, the type of crops grown in Ireland are likely to change. Droughts are also likely to lead to a reduction in crop yields. Anticipated increases in pests and diseases would also have a significant impact on the economy of the agricultural sector.

In winter, increases in rainfall will also have an impact. The use of machinery could be severely restricted due to boggy conditions, and in spring the release of livestock into the fields could be delayed due to excessive moisture still present in the ground. All these factors would have a knock-on effect in terms of efficiencies and production.

An additional consideration is that while actual food shortages may not be expected in Ireland, there is still a need to prepare for extreme events such as oil shortages or hauliers’ strikes.

Previous - How does it affect me?
Next - Health