Courtesy of the Department of Environment, Heritage and Local Government
Enlarge image

Twenty of the largest cities in the world are located in coastal zones. The predicted rise in sea level, with associated flooding, has the potential to seriously affect the infrastructure in these coastal cities. Emergency services will also be affected and so will not be able to respond effectively.

The higher sea levels will also lead to increased coastal erosion so many low-lying islands (such as those in the Pacific and Indian Oceans) and countries (such as Bangladesh) will lose a lot of their land to the sea or may disappear underwater altogether.

Global warming has already threatened vital infrastructure such as road and rail networks, water and energy systems, and the damage is set to worsen. In some countries there may be a need to relocate streets, motorways and railways away from coastal areas. There will ultimately be a call for harbour and port improvements to handle higher tides and the construction of more sea walls to combat flooding. 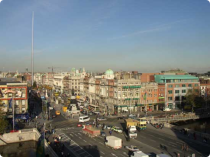 Damage to bridge infrastructure such as Dublin’s O’Connell Bridge and the Malahide viaduct was attributed to the consequences of rising tides. The National Conservation and Heritage Group highlighted the presence of stress cracks and the damage to pillars and a parapet on the bridge. After the repair work was completed, the damage was said to be the result of rising tides on the River Liffey caused by climate change.

As almost 60% of the population of Ireland live along the coast, the anticipated increase in frequency and intensity of storms is likely to have a huge impact on infrastructure in coastal regions. For example, the coast of Killiney Bay, south of Dublin, consists of soft sediment that may eventually lead to the need for investement in sea defences for the east coast railway, which runs along it and has to be regularly reinforced and protected.

Storm Ophelia in 2017 caused between €500m and €800m worth of damage. Increasing frequency and intensity of these storms is projected as the climate warms, leading to potentially huge future costs.