Under the first Kyoto Protocol, Ireland committed to restrict greenhouse gas emissions growth to an increase of 13% over the 1990 baseline levels within the 2008-2012 periods. During the second Kyoto Protocol commitment period, Parties, including Ireland, committed to reduce GHG emissions by at least 18 percent below 1990 levels in the eight-year period from 2013 to 2020. After the Paris Agreement in 2016 all EU member states committed to a reduction in emissions of 40% of 1990 levels by 2030. In 2020 this target was updated to 55% by the EU.

Here in Ireland, we are not on track to meeting our targets, and the challenge is becoming increasingly more difficult. To reach net zero emissions by 2050, significant reductions across all high-emissions sectors are required. The longer we take to reduce our emissions, the harder (and more expensive) it becomes to achieve our goals. 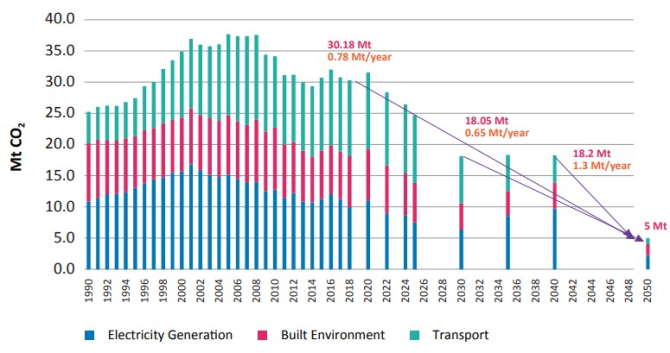 In 2007 the Department of Environment Heritage and Local Government published the second National Climate Change Strategy  outlining the key objectives for reductions in greenhouse gases across the energy, transport, industrial, agriculture, forestry and built environment sectors between 2007 and 2012.

In 2012 the National Climate Change Adaptation Framework was launched, providing a strategic policy focus to ensure adaptation measures are taken across different sectors and levels of government to reduce Ireland's vulnerability to the negative impacts of climate change. This was bolstered by the Climate Change Bill 2013, whose aim is to ensure that the State's net carbon account for the year 2050 is at least 80% lower than the 1990 baseline. Further support comes from the Climate Action and Low Carbon Development Bill 2015, whose purpose is to pursue the transition to a low carbon, climate resilient and environmentally sustainable economy by the year 2050.

A number of national reports have recently been published that include a range of cross sectoral policies and actions to keep Ireland in line with the Paris Agreement targets. These reports include the National Mitigation Plan, published in 2017, which incorporates the Governments shared approach to reducing greenhouse gas emissions and Ireland’s Draft National Energy and Climate Plan, which was submitted to the European Commission in 2018 and focused on policy measures specific to climate and energy. Most recently, the  2019 Climate Action Plan to Tackle Climate Breakdown has been released which sets a course towards ambitious decarbonisation targets and outlines the scale of the challenge by addressing the current state of play in multiple sectors.

Partnership between government departments, business, industry and the community is required if Ireland is to achieve these goals.

The Climate Change Advisory Council (CCAC), which is an independent statutory body that reviews national climate policy, was established under the Low Carbon Development Act 2015. Its Latest Annual Review has called for additional measures in order to reduce national emissions. Additional measures suggested from the council include a reduction in the national herd, an end to burning at Ireland's Moneypoint power plant by 2025, and an increase in carbon tax. The review gives a deeper focus on the agricultural sector as this is Ireland's biggest contributor to emissions (33% of the national total). This review was undertaken before the National Climate Action Plan was published for review by the Advisory Council, nevertheless it is a great input as it covers arising issues as well as solutions not yet detailed in the Government's climate plan. The Minister for Communications, Climate Action and Environment stated since the reviews release, that any input from the Advisory Council, who will soon have a stronger statutory role, will be taken into account in the ever evolving National Action Plan.

In early May 2019, Ireland became the second country in the world to declare a national climate (and biodiversity) emergency. The declaration was the outcome of an amendment in the Oireachtas report on climate action that was accepted, without a vote, from both the Government and opposition parties. This landmark occasion, allowed for the cross party report of the Oireachtas Joint committee to be adopted as the national blueprint for policy on climate action. This report goes beyond previous policy documents on climate action as it sets out a cross sectoral framework that includes a set timeline on a range of ambitious policies that respond to the Citizens Assembly report and acknowledges the stark warnings outlined in the recent IPCC Special Report on Global Warming of 1.5C.  The Department of Communications, Climate Action and Environment have described the move as a significant statement that will strengthen the government's hand in bringing forward plans.

Since declaring the emergency, little concrete progress has been made toward achieving our targets.