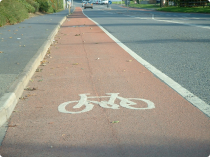 In some counties in Ireland, particularly Dublin, they have cycle lanes. Cyclists use these to bypass traffic. They allow cyclists to travel safely.

In some counties in Ireland, particularly Dublin, they have cycle lanes. Cyclists use these to bypass traffic. They allow cyclists to travel safely.

European countries face competing demands over transport policies. While transport plays a fundamental role in economic development, concern is increasing about the sustainability of current transport policies, and how they can harm human health and the environment. In western countries, our lives and environments have grown to accommodate regular car use. For instance, 30% of car journeys in Europe cover distances of less than 3 km; 50% cover less than 5 km. These distances can be covered within 15–20 minutes by bicycle or 30–50 minutes of brisk walking (World Health Organisation, 2018).

Promoting healthy and sustainable transport options prevents the negative effects of current transport patterns on human health, such as those caused by air pollution and physical inactivity. Active transport involving non-motorised transport methods of travel such as walking and cycling provide measurable benefits by increasing daily physical activity, and can reduce greenhouse gas emissions by minimising car usage, improving air quality in the process. For instance, recent research shows that individuals who cycle have a longer life expectancy than those who don't. Health benefits associated with cycling have also been shown to correspond to more than 3% of Gross Domestic Product in countries like the Netherlands. Other benefits of active transport include improved social well-being and greater community cohesion. Such active transport methods also tend to combine public transport usage for longer distance trips, as public transport generally involves walking or cycling components as part of a journey.

Copenhagen, Denmark serves as best international practice with respect to healthy transport initiatives. The Danish capital is considered as being one of the world’s greenest, most liveable, most cycle friendly and happiest cities. For example, approximately 50% of Copenhagen's city-centre trips currently involve bicycle, with 96% of citizens being able to walk to parks or beaches in under 15 minutes (The Guardian, 2016). Additionally, the city is currently improving accessibility for buses on central road routes to reduce commuting time. For instance, bus lanes are being established with traffic-light priority for buses to encourage greater uptake of public transport. 98% of Copenhagen citizens have less than 350m to travel for public transport. These initiatives are assisting the city to become CO2 neutrality by 2025. The objective is that by 2025 at least 2/3 of the growth in the total number of personal trips must be made using green transport ie, walking, cycling and public transport.

To encourage greater use of green transport, the municipality also has a goal of reducing cycle travel time by 15% by 2025. Similarly, the average journey time by bus is expected to be reduced by during peak hours in the coming years, and in the inner city, pedestrians must have adequate 'green' time at the signals to cross the road without having to stop in the middle of the road, thereby encouraging greater use of green transport methods.

Car travel in Ireland continues to be the most popular means of travel for citizens commuting to work. In 2016, 1.23 m people travelled to work by car. This is followed by walking as the second most popular commuter travel option, with 175,000 people walking to work, while public transport usage is the third most preferred option with 174,500 using public transport to get to work in 2016. The number of workers cycling to work in 2016 was approximately 57,000 people, an increase of 43% from 2011 figures. A number of measures however exist nationally to encourage use of sustainable and healthy transport methods.

Walking offers an excellent, healthy way of getting around in Ireland, particularly in large urban areas. As 30% of car journeys in Europe cover distances of less than 3 km and 50% cover less than 5 km (30–50 minutes walk), consider walking as a means of getting around next time you need to travel short distances.

The Cycle to Work Scheme is a tax incentive scheme which aims to promote cycling to and from work for employees. Under the scheme, employers can pay for bicycles and bicycle equipment for their employees and the employee pays back through a salary deduction arrangement of up to 12 months. The employee is not liable for tax, PRSI, levies or the Universal Social Charge on their repayments.

The scheme covers the purchase of bicycles and equipment up to the value of €1,500 for pedelecs or ebikes and €1,250 for all other bicycles from approved suppliers and you can avail of the bike to work scheme once in a 5 year period. More details on the scheme can be found here.

Dublin bikes is a public bicycle rental scheme which has been in operation since 2009. At its launch, the scheme used 450 bicycles with 40 stations. Dublin was the 17th city to implement such a scheme, and it was considered one of the most successful bike sharing schemes in the world. By 2019, 29.5 million journeys had been taken since inception and  66,400 people held long term subscriptions to the scheme (DublinBikes, 2020).

Worldwide, light rail transit has become a measure of the revival in public transportation. With around 400 systems running in 50 countries and an additional 260 being built or planned, light rail is being advanced in cities keen to promote more sustainable travel solutions.

Luas Cross City, which launched in December 2017, is an extension of the existing Luas light rail network in Dublin city centre. It offers a fast and reliable modern transport system, links central city business precincts, is expected to increase public transport use in the coming decades and reduces city centre congestion. Additionally, in its environmental impact assessment for the Luas Cross City, Transdev maintained there would be a 17 per cent decline in CO2 emissions in the city centre as more people replace car transport with using the Luas.

​Bus Connects aims to radically change the current bus system in Dublin through a 10 year programme of integrated actions to deliver a more efficient, reliable and enhanced bus service for more people. This is expected to be achieved through;

A comprehensive review of public transport facilities for the Fingal/North Dublin was undertaken in 2015 to examine medium to long term public transport needs of the region. The study considered a wide range of possible schemes to serve the public transport needs including previously proposed schemes and potential new schemes. Following this, the Authority has recommended that “Metro Link” be developed, running underground from St Stephens Green through Ballymun, under Dublin Airport and through Swords (by-pass), in order to best meet the future transport needs of this rapidly growing region. The Authority has commenced initial work on the design and planning stages of the Metro Link in collaboration with Transport Infrastructure Ireland (TII).