Waste Not, Want Not

Everybody on the planet leaves a carbon footprint. Can you guess what this means?

A carbon footprint is the amount of greenhouse gases that a person uses because of their lifestyle. 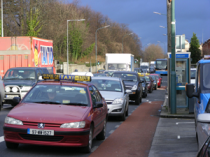 As you can see, there are a lot of ways a person can create carbon dioxide in the atmosphere.