Did you know that 72% of the Earth’s surface is covered in ocean? It is all of this water that makes Earth a special planet. No other planet in our solar system has liquid water, although some planets have frozen water. Without water there would be no life.

Can you name the five major oceans on Earth?

They are the Pacific Ocean, the Atlantic Ocean, the Indian Ocean, the Arctic Ocean and the Southern Ocean. The Pacific Ocean is the largest of all of them and is nearly the same size at the other three combined! However, as they are all connected to each other they could really be thought of as one big ocean. 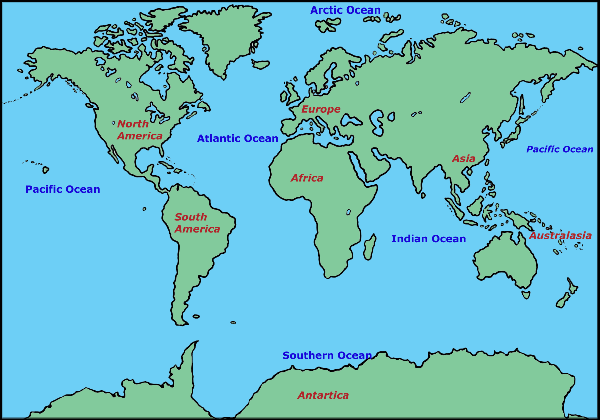 The oceans & continents of the world

The ocean floor never stays still! Did you know that there used to be just one really big continent on Earth? This was called Pangaea. Pangaea began to break up about 180 million years ago. This was because the ocean floor was moving. It moves very slowly, and over millions of years entire continents move across the Earth! Today there are seven continents on Earth.

Can you name them all? They are Europe, South America, North America, Africa, Australasia, Asia and Antartica. See if you can find them all on the map above.