Grįinne Mhaol is a legendary Irish pirate that lived in Ireland in the 16th century. She sailed from island to island along the west coast with her fleet of ships. She raided as she went, building up a great hoard of wealth and earning her title as the Pirate Queen. She was also one of the last Irish leaders to defend against English rule in Ireland. 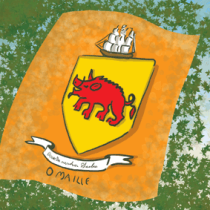 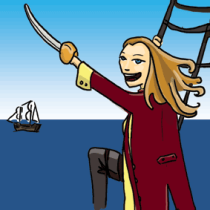 Grįinne Mhaol: the Pirate Queen of Mayo
Courtesy of An Post

Grįinne was born into the Ó Mįille family (O’Malley) in 1530. They were a noble, seafaring family that lived in Co. Mayo and her father was chieftain of his clan.

She is known by different names e.g. Grace O’Malley, Granuaile. Her real name is Grįinne Nķ Mhįille but she is better known by her nickname, Grįinne Mhaol.

As the legend goes, Grįinne wanted to go on a trading voyage with her father to Spain. She was told she could not go because her beautiful long hair would catch in the ropes. This made her very angry, so she decided to cut off all her hair! Her father had no more excuses, so he had to let her on board. This is how she got her nickname ‘Grįinne Mhaol’; in Irish, maol means ‘bald’!

Grįinne was an extremely tough woman, and feared along every coast in Ireland. Once, when she was on a trip to Dublin, she wanted to rest at Howth Castle. However, the lord would not open the gates to her. She became very angry, and kidnapped one of the lord’s sons. In return for his son, Grįinne made the lord promise to leave his gate open to visitors and to set an extra place for every meal. This tradition continues to this day!

During her lifetime, Grįinne was married twice. The first marriage was to Dónal O’Flaherty and the second to Richard Burke. Both families were very powerful in Connacht. At this time King Henry VIII of England was trying to increase his rule across Ireland, but Grįinne and her family refused allow the English into Galway Bay.

The clashes with English got worse after her second husband, Richard, died. She was a strong, brave woman but she was eventually arrested by the English in 1584 and Connacht was brought under English.

According to legend, she is buried on her family’s land on Clare Island but this has never been proven.