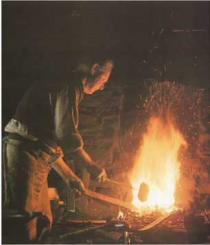 John Maloney, a third generation blacksmith from County Clare heats the iron so it can be beaten into shape.

John Maloney, a third generation blacksmith from County Clare heats the iron so it can be beaten into shape.

Up until the 18th century most artists would have trained with a master craftsman. This included metalworkers, sculptors, painters and scribes. Many master artists would have taught their children their skills. They would then work in the family business.

From the 15th century, this way of training began to change. Many different craft guilds, or clubs, were set up for the different types of art. These were mainly the larger cities, such as Dublin, Cork and Galway.

The guilds decided which young artists would be trained and made sure the artists' works were good quality. They also set the artists' wages.

In the 18th century artists in Ireland began going to art school. The main school of art in Ireland was the Dublin Society Schools. This eventually became the National College of Art and Design in 1971.

The art schools were based on the Royal Academies of Art in London and Paris. Students first learned how to draw. They studied drawing by copying the works of the old masters. They also learned to draw from sculptures and models. When they were able to draw well, they were allowed to start painting.

In the 19th century, the Royal Hibernian Academy was set up. It had a lot of control over the type of art education in Ireland. However, the art students did not agree with this and protested against it in the 1960s. Since there have been many new ways of teaching art. Students can now create their own style of art.