Cork played a key role in Ireland's struggle for independence. On 11 December 1920, during the War of Independence, British forces set fire to many of the buildings on St Patrick's Street. Some of them were completely destroyed, while others were badly damaged. On that same night, the old City Hall on Albert Quay and the old Carnegie Library on Anglesey Street were also destroyed. Photographs taken at the time show the damage done. Cork was also a centre for the Civil War that followed independence. Look at the picture below 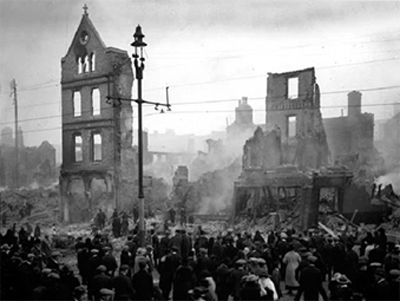 It shows the ruins of Sunner's Chemists after the burning of Cork.
What is left standing?
What do you think all the people are doing?

Do you know if anything happened during the War of Independence in your area?
Please ask older members in your family, as they may know. Your local library may also have some material on this.